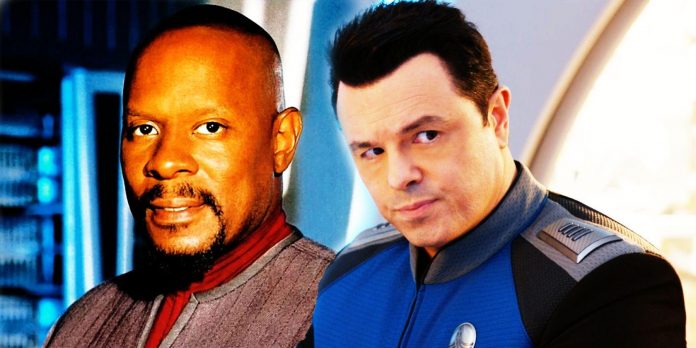 Attention! SPOILERS for the 8th episode of the 3rd season of the TV series “Orville” (“Midnight Blue”).

The War against Kylon in season 3 of “Orville” allows Seth MacFarlane’s sci-fi comedy-drama to get its “Star Trek: Deep Space 9” moment. First aired in 1993, DS9 was commissioned by Paramount in response to the popularity and success of Star Trek: The Next Generation. The series, which takes place aboard the Federation Space Station, initially struggled to get back on its feet with the concept of a stationary outpost, which contradicted the research and discoveries of previous Star Trek shows. Only after the appearance of the Dominion and the famous arch, the War of the Dominion Deep Space Nine found its place and became one of the most famous and influential Trek shows of the 90s.

“Orville” has always been a gentle homage to this era of “Star Trek” and similarly struggled to get back on its feet in the first season. Now renamed “Orville: New Horizons”, the series moved away from the roots of the sitcom towards science fiction based on problems. allegories of the Star Trek franchise, but with jokes. This new approach finds its embodiment in the 8th episode of the 3rd season of the TV series “Orville” “Midnight Blue” – a powerful political thriller about the moral compromises that people make during the war, linking them with Deep Space Nine.

Morality during the war was a constant theme in “Star Trek: Deep Space 9”, especially in season 6, episode 19 “In Pale Moonlight”. In this episode, Benjamin Sisko (Avery Brooks) made moral compromises in an attempt to form an alliance with the Romulans and turn the tide of the war. “Orville” turns this “Star Trek” story into “Midnight Blue” and explores the moral compromises that have to be made to maintain fragile alliances in wartime. In a dramatic episode that lasts almost 90 minutes, tensions between the Union and the Moklans reach a climax due to the latter’s mistreatment of women of their kind. Despite Dolly Parton’s unexpected cameo, this is an episode that has little laughs and focuses on telling the moral story that DS9 excelled at.

In the third season of “Orville”, the Planetary Alliance is waging a war against Kaylon and has suffered heavy losses and losses. They are also losing key allies, weakening the Alliance’s position against a seemingly unstoppable race of genocidal androids. Having lost a potential alliance with their old enemies, the Krill, who plunged into a dystopia in the style of the 2nd season of Star Trek: Picard, the Union still clings to its alliance with the Moklans. And this is despite the gender inequality, fanaticism and brutality that determine how the same-sex society of Moklans treats the rare Moklan women who are born. Both Gordon (Scott Grimes) and Ed (Seth MacFarlane) protest that the Union turns a blind eye to these abuses during the episode, but to no avail. Unfortunately, it takes the abduction and brutal torture of Bortus’ daughter (Peter Macon) to finally convince the Union to sever ties with the Moklans, despite the fact that this will create a strain on military operations.

An Alliance remaining true to its morals and losing an ally is a different take on DS9 Captain Sisko jeopardizing his own morals during “In the Pale Moonlight.” Like the alliance with the Moklans, the Romulans turn a blind eye to the aggressive actions of the Dominion on their territory, leading to significant losses of the Federation. Sisko must fabricate the reason why the Romulans rebelled against the Dominion using a falsified holo recording. This is what Orville was doing earlier in season 3, episode 4 “Softly Falling Rain”, where Krill used falsified holograms in his political campaigns. This shift to a more political and allegorical narrative shows that Seth MacFarlane’s show continues the traditions of such series as Star Trek: Deep Space 9.

CoD Warzone Red Doors: How to Find Them and What They...