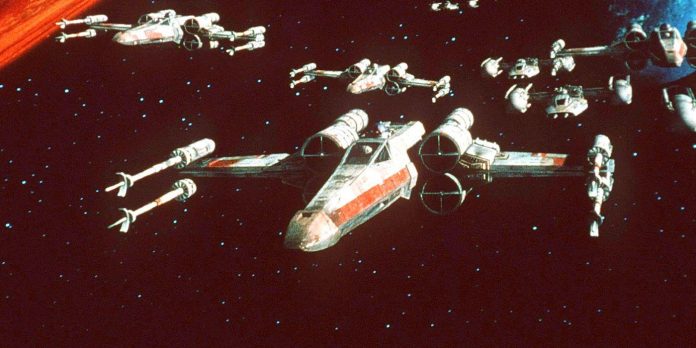 The X-Wing used in the production of Star Wars: A New Hope was sold at a recent auction for a staggering $2.3 million. Released in 1977, the movie “Star Wars: A New Hope” introduced viewers to the vast world of George Lucas’ epic space opera, which features special effects the likes of which viewers have never seen before. The film tells about the path of Luke Skywalker from a simple farmer on the desert planet Tatooine to the realization that he will play a crucial role in the ongoing struggle against Darth Vader and the evil Galactic Empire.

“Star Wars: A New Hope” is known not only for lightsaber fights and the introduction of Force, but also intense space battles. Since computer graphics had not yet been invented, the filmmakers relied on miniatures and models to create many of the film’s epic sequences, including the final battle when rebel forces attempt to destroy the Death Star. Each faction uses different spaceships: the Empire forces use TIE fighters, and the rebels use X-Wings, so named because of the unique X-shaped wings that unfold when the ship is in attacking formation. The ships continue to appear in Star Wars movies and shows to this day, including most recently in the Disney+ series Obi-Wan Kenobi.

Related: Why Anchorhead’s Deleted Scene in New Hope Is So Important to “Star Wars”

According to a new report by THR, a miniature model of the X-Wing used to create the final battle on the Death Star was recently sold at auction for $2.3 million. The screen model created by Industrial Light & Magic was expected to sell for between $500,000 and $1 million, but exceeded expectations, receiving $2,375,000. The model was used by the red leader Garven Dreis, played by the late Drew Henley, and it is made of lightweight rigid foam. Check out the X-Wing model below:

The X-Wing model remains in very good condition, with only minor paint peeling and deformation of one of the ship’s laser cannons. Presumably, the model can be compared with a frame from the movie “Star Wars: A New Hope”, where the Red Leader’s engine explodes during the decisive battle on the Death Star. The sale of the X-Wing mode comes about a month after the death of Colin Cantwell, the concept artist responsible for designing a number of ships and vehicles from Star Wars, including the X-Wing and the Death Star itself.

Despite the fact that the movie “Star Wars: A New Hope” was released more than 45 years ago, it still holds a special place in the hearts of many fans. Although the special effects will be significantly improved in the films “Star Wars: Episode V — The Empire Strikes Back” in 1980 and in “Star Wars: Episode VI: Return of the Jedi” in 1983, the original Lucas 1977 still shows a special charm and is a fundamental work in terms of using models and miniatures. While newer releases such as Star Wars: Skywalker.