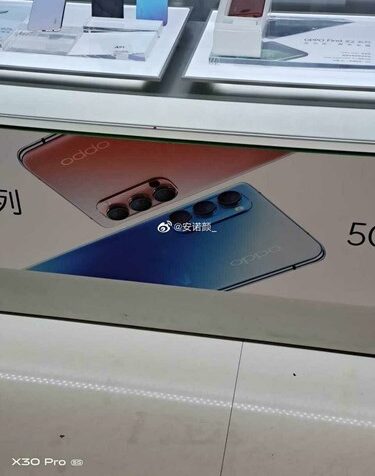 Reno has become one of Oppo’s popular series, and the series continues with new models. The poster for the fourth model of the series, which will replace Reno 3, appeared in Weibo. Some features of the model, which attracted attention with its bold design, also appeared in the poster.

While only the back surface of Reno 4 can be seen in the published poster, the quad camera setup appears in a large module. The sensor itself is pretty big. It seems that other Chinese companies have started following the ‘bold design’ trend that started with the iPhone 11 series. Apart from that, slogans and Oppo emblem are seen on the device.

Bold designs are liked by users; however, one of the most important features is that the camera performs well. Although the last leaked poster showed that there were pinkish gold and blue color options, the previous leaks also had the option of black and white.

It turns out that there are four sensors in the back, the main, ultra-wide, telephoto and unknown. The last sensor can be a ToF, macro or depth sensor. It is not known whether Reno 4 will have a special name. As is known, BBP Electronics never used the number “4” in the smartphone series; In the OnePlus series, OnePlus did not use the number 4 by jumping from 3T to OnePlus 5.

Oppo Reno 3 specifications
Oppo Reno 3, the pioneer of Reno 4, was launched in China with 5G support, while it was offered with 4G support to the global market. Oppo Reno 3 5G has a 6.4 inch AMOLED display. The smartphone, which has a set of four cameras, a 64-megapixel primary, 8-megapixel ultra-wide and two 2-megapixel cameras, has a 32-megapixel camera on the front for selfies. In the Chinese version, MediaTek Dimensity 1000L chipset was used for 5G connection. The device also features a 4025 mAh battery with 30W fast charging support, which is claimed to be 50% charged in twenty minutes.