Home Entertainment Only Murders in the Building, Season 2, Review 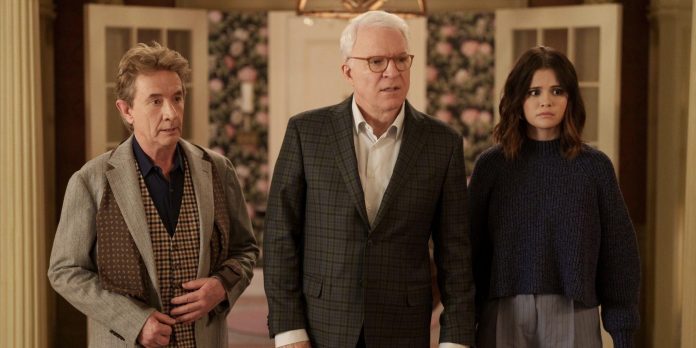 There is an art to writing a murder mystery, and despite there being so many different sources from which to draw inspiration, it isn’t always done well. Luckily for fans of the genre, the second season of Only Murders in the Building is there to deliver not just a fascinating mystery, but also a group of compelling characters whose own stories only get deeper.

The show, created by Steve Martin and John Hoffman, seemed to arrive at just the right moment in 2021, hitting on the popularity of true crime podcasts and giving audiences a comedic antidote to what had been a rough couple of years. The second season, which just premiered its first two episodes, manages to up the stakes for the main trio while also building on their pasts and presenting new challenges for everyone.

RELATED: New Only Murders In The Building Season 2 Trailer Is Full Of Fresh Suspects

Only Murders picks up right where the first season left off: with Mabel (Selena Gomez), Oliver (Martin Short), and Charles (Steve Martin) being taken in by police after the murder of Arconia board president Bunny Folger. The three are immediately noted as persons of interest, considering not only their relationship with Bunny, but the much more damning fact that Mabel was found with the body, her sweater stained with Bunny’s blood, and one of her knitting needles planted in Bunny’s chest.

It’s a compelling setup, and it provides enough of a departure from how the first season structured its mystery. In this case, the sleuths have become suspects, and they are not only working to clear their own names but to find the actual culprit, who may still be residing in the Arconia. This time around, there isn’t quite as much animosity from the residents of the storied apartment building toward the three hosts, but there is enough tension to keep things interesting, and Mabel, Charles, and Oliver’s reputation has put them in a more complicated position: they may have solved a murder, earning them some goodwill, but they are also now suspected murderers themselves.

Mabel also gets the romantic subplot this season, as she makes a connection with British artist Alice Banks (Cara Delevigne). This subplot (which may also tie into the main investigation) lets the show give Mabel even more depth and explore how she navigates a relationship during what is clearly a very precarious time in her life. Selena Gomez does some of her best work in the scenes between Mabel and Alice, hitting all the right emotional beats and lending some real weight to the pair’s more challenging moments.

Charles and Oliver are also dealing with their own opportunities. With their podcast putting Charles back in the spotlight, he’s been cast in a reboot of his show, Brazzos. Of course, there’s a new Brazzos in this iteration, and Charles is playing “Uncle Brazzos” in a recurring role. Meanwhile, Oliver is working with Amy Schumer (playing herself) to develop the podcast into some kind of streaming series while also helping his son direct a school play. On top of that, he’s also dealing with a vengeful Teddy Dimas (Nathan Lane). The trio must also deal with Bunny’s mother, played with great comedic aplomb by Shirley MacLaine.

Martin, Gomez, and Short haven’t missed a beat since the end of last season. As they were in their first outing, the trio are perfectly matched and play well off each other. Martin and Short have obvious chemistry from their many comedic outings together, but it’s always refreshing to see how well Gomez can hold her own against these two comedy veterans. She manages to ground them and bring a millennial contrast to their more classical sensibilities. Of course, it almost doesn’t need to be said that those classical sensibilities still deliver much of the show’s funniest moments. Martin’s Charles is still the more subdued, awkward member of the group, while Short’s Oliver is even more exuberant and prone to oversharing than he was in season one.

While any other mystery show might only have the capability to draw strength from its plot or its cast, Only Murders manages to do both wonderfully. Over the course of the five episodes watched for review, the mystery of Bunny’s murder is expertly crafted, with the added twist that the murderer is clearly trying to frame Mabel, Charles, and Oliver. However, like any good mystery, the plot beats are balanced out by excellent character work. Only Murders has a knack for adding layers to its mystery, which it did so expertly in season one. Here, it’s not just a murder that’s being investigated, but the origin of a very odd painting with a connection to Charles and a potentially life-changing revelation for Oliver.

It’s almost become a cliché to say that the city of New York is a character itself, but it’s hard to deny that Only Murders could take place anywhere other than in the Big Apple. The striking architecture of the Arconia plays a big part in the style of the show, and the supporting characters all have that signature attitude that has become so associated with living in the city. There’s a specific vibe that comes with the cold weather in Manhattan that just really works this story. The excellent music from Siddhartha Khosla, from foreboding strings to gentle piano notes, serves to punctuate every significant moment, and it fits perfectly.

Returning to Only Murders in the Building is like seeing an old friend and feeling like there hasn’t been any lost time. The things that feel familiar about the show don’t make it feel stale. In fact, it’s quite the opposite. The latest murder mystery not only provides an intriguing plot, but all of the character work continues to build on characters who already feel so lived-in that it’s almost surprising the show is only in its second season. Arconiacs can rest easy knowing that Only Murders in the Building is only getting better with time.

Only Murders in the Building is streaming on Disney Plus and Hulu with new episodes every Tuesday.

Michael B. Jordan just picked up a note from his ex...

Nina from NiziU celebrates her birthday with a very special project