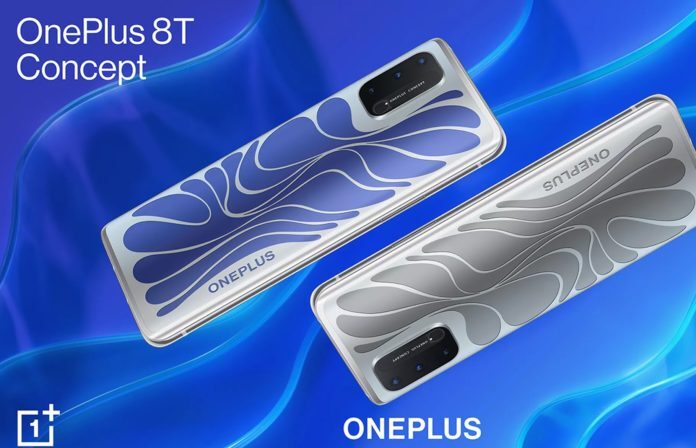 OnePlus has a new concept phone. Some of the ideas and details currently shown at the concept stage may appear on the company’s phones in the future. The concept phone, named OnePlus 8T Concept, is very similar to the OnePlus 8T that was released a few months ago. But besides the motion tracking radar module, it also has a very unique back design that changes color.

According to OnePlus, this color-changing effect is achieved by a film containing metal oxide that sits behind the phone’s glass and changes color as different levels of voltage are applied to it. In its simplest form, it can change the color of the phone to show notifications, similar to the notification light that it has added to their phones in the past and has been useful for notifying an incoming phone call. But where things get really interesting is when the concept phone is paired with the rear-mounted radar module.

This module, placed in the camera ledge on the back of the phone, uses millimeter wave radar to reflect electromagnetic waves from its surroundings. It allows the phone to “detect, view, find and track” objects. While OnePlus says this mmWave technology is “borrowed from 5G,” he adds that the radar module is separate from any mmWave communication module in the phone.

It looks functionally similar to the Pixel 4’s Motion Sense technology with radar, allowing you to slide your hand over the phone to skip music or silence alarms. It can also detect when you’re near the phone to show you the time and notifications on the Pixel 4. While the function is interesting, Google has not included it in future phones.

This concept phone can use this motion tracker to do simple things like answering a phone call with a single gesture. Or it could offer more advanced functions such as detecting a user’s breath. This can also be combined with the color-changing backside to offer some interesting use cases. For example, you can change the color of the back of the phone to notify you of an incoming call, and then accept or reject the incoming call with one gesture without having to touch the phone itself. Or the radar can detect your breathing and then change the color of the back of the phone over time, thus making the phone “effectively a biological feedback device.” This phone looks like a collection of ambitious features. However, there is no guarantee that all this will happen in an individual consumer device. If you remember, a little less than a year ago, OnePlus was showing the OnePlus Concept One, an interesting device that uses electrochromic glass to eliminate its rear cameras (and also acts as a pretty neat little ND (Neutral Density) filter). However, this technology is not yet featured in any of the company’s flagship phones.

Like the Concept One before it, OnePlus says they have no plans to sell the OnePlus 8T Concept as a commercial product. So it would be best to think of it as a small showcase of this thing that the company is working on. However, the technologies featured here may one day appear on a OnePlus smartphone.

The Witcher: The universe of the Netflix series soon in a...

Is the direction of the Bitcoin Price in the coming days...