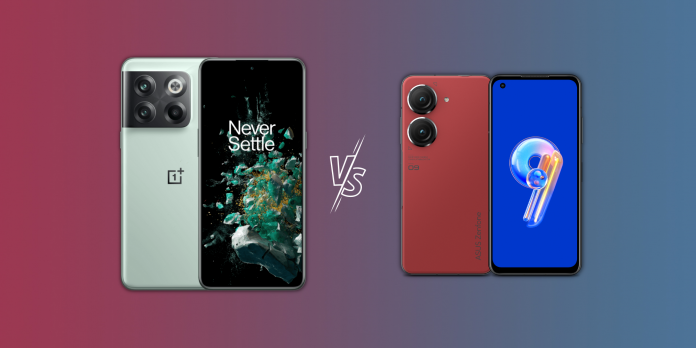 OnePlus 10T and Zenfone 9 are the latest flagships to hit the market, but which one is the best? Recall that the latest OnePlus smartphone of the “T” series was released in 2020 under the name OnePlus 8T. However, due to a global shortage of chips and supply chain issues during the pandemic, the company skipped the OnePlus 9T. However, the OnePlus 10T has slightly improved specs compared to the OnePlus 10 Pro released earlier this year.

Speaking of Zenfone 9, it is the successor to the Zenfone 8 released last year with a Snapdragon 888 5G chipset and a 64 MP main camera. In the world of smartphones with a large screen, the Zenfone 9 combines flagship features with a compact design. But is it enough to compete with the OnePlus 10T? Let’s find out.

While the OnePlus 10T and Asus Zenfone 9 have a central hole in the front, their size and location of the camera module differ between the two smartphones. OnePlus 10T is available in two colors: Moonstone Black and Jade Green. On the other hand, the Zenfone 9 comes with a soft-touch back panel and is available in four colors: starry blue, moonlight white, sunset red and midnight black. In addition, the OnePlus 10T has a 6.7-inch Fluid AMOLED display protected by Gorilla Glass 5. By comparison, the Zenfone 9 is equipped with a tiny 5.9-inch AMOLED panel protected by Gorilla Glass Victus. Both devices support 120 Hz refresh rate and can play HDR10+ content. However, gamers will have a slight advantage over the OnePlus 10T, as it has a 360 Hz touch response rate.

The OnePlus 10T and Zenfone 9 come with the same Snapdragon 8+ Gen 1 SoC, the latest and fastest chipset available for Android smartphones. In addition, both smartphones offer up to 16 GB of LPDDR5 RAM, 256 GB of UFS 3.1 storage and have a cooling system. Consequently, smartphones can handle anything that gets in their way, including multitasking, gaming and editing. Out of the box, both smartphones run on Android 12: standard Android on Zenfone and OxygenOS on OnePlus.

As for connectivity, both smartphones support 5G with a frequency of less than 6, Wi-Fi 2.4GHz/5 GHz, Bluetooth v5.2 with aptX, NFC and GPS codec (L1 + L5). In the US, the OnePlus 10T will be available for $649, and the Zenfone 9 for $699. Since both smartphones offer the same camera processing and performance, it all depends on personal preferences. Those who want a flagship with maximum performance should choose OnePlus 10T. However, the Zenfone 9 should be the best for those who want a small smartphone with the same power.

Wait, how did Clementine come back in season 4 of Wild...