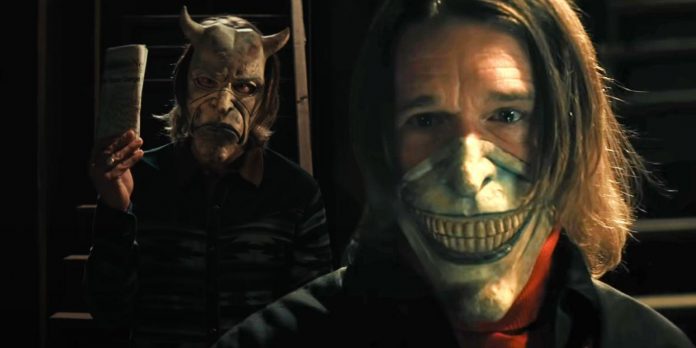 Warning! SPOILERS for the Black Phone.

A small detail in the Black Phone draws an important parallel between the Grabber and another character, which underlines the importance of the darkest theme of the film. Based on the short story of the same name by Joe Hill, “Black Phone” primarily concerns Finney Blake, a boy who was taken away by a serial child abductor and murderer known as Grabber (Ethan Hawke). The black phone combines elements of the supernatural and more realistic horror, which makes the watch unforgettable frightening.

One of the elements of the “Black Phone” that stands out is a serious study of the topic of child abuse and the emotional and psychological impact it can have on victims. This is most evident in the Grabber’s treatment of his victims, but Finney and his sister Gwen are also subjected to domestic violence by their father Terrence. Terrence is shown as an alcoholic who subjects both his children to physical and emotional abuse, directing tirades at them for the most mundane reasons and imaginary offenses.

The most obvious characteristic of a Grabber is his mask, which changes from scene to scene, reflecting his mood and plans. The Grabber mask in the Black Phone is used as a way for the character to hide from himself and his victims, but it also draws a visual parallel with Finney and Gwen’s father. The most obvious physical trait of Terrence is his big beard, which hides his face, like a Grabber mask. The fact that “Black Phone” features two of the most violent figures in Finney’s life, both with their faces covered, helps create a subtle narrative connection between the abuse Finn suffers at home and the torment of the Grabber.

The similarities between Grabber and Terrence Blake are small, but significant. The connection between the beard and the mask is most obvious, but there are also scenes in which each man sleeps in a chair, and Finnie tries not to wake them up. In these little things, the Grabber in the “Black Phone” and Finney’s father play similar roles in the boy’s life – he is stuck in their controlling and cruel nature and initially does not want to resist. The meaning of Finn’s murder of a Grabber and his escape is that he found the strength to stand up for himself, and his father’s remorse offers him a little redemption in the last scenes of the film.

The visual parallels between Terrence and Grabber are important because they compensate for the father’s ending. Although Terrence may be sorry, the way he and Grabber look alike makes it clear to the public that he does not deserve sympathy. Like Grabber, Terrence Blake is another tormentor in Finney’s life, and he contributes to the cycle of abuse from which Finney is forced to flee in the “Black Phone”.

The statement about microtransactions in DiabloImmortal is misleading, the director believes