Home Entertainment One-Punch Man 166: Is this the end of the beloved S-Class hero? 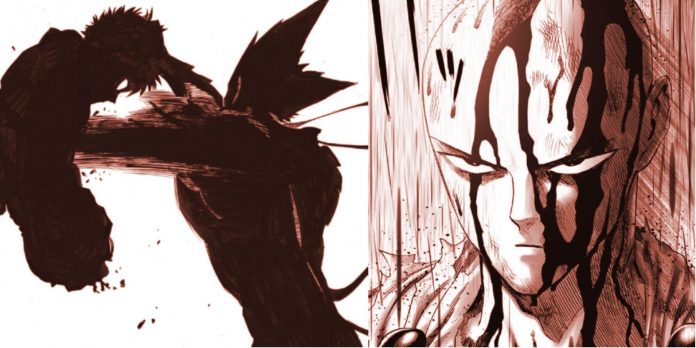 The recent chapters of One-Punch Man have been filled with breathtaking developments revolving around central characters like Garou – the Hero Killer, Saitama, Genos and side characters like Tareo & Blast. The Monster Association Arc evolved from a villain group battle with powerful heroes to Garou’s dominance over everyone, heroes and villains alike.

Linked to this development are the events in Chapter 166; events that tilt the very foundation of the One-Punch Man world. Chapter 166 revealed certain details about the S-Class Hero, Blast, but it also featured the death of Saitama’s faithful cyborg student. Garou is truly becoming “Absolute Evil,” but is the end result really worth it?

The Powers of S-Class Hero Blast

The powers of the number one S-Class Hero, Blast, have always been a mystery so far; however, it was finally revealed in chapter 166. Chapter 166 reflected the collapse of humans around Garou due to the radiation coming off him. Even the B-Class Hero Mitsuki was rendered useless by experiencing the radiation from Garou, showing just how powerful the aura Garou emits is. This leads to the appearance of Blast through a dimensional portal. As he suddenly arrives, he reiterates Bang’s belief that Garou was being controlled, revealing that Garou was indeed controlled by God. Furthermore, Blast commented that the power Garou emitted was dangerous to the existence of all living things on planet Earth. He further questioned Garou on whether wiping out all life on the planet was truly his goal as the Hero Killer.

Unfortunately, even after Blast suggested a plan to Garou to teleport him to another dimension, he rejected Blast’s plans, maniacally spouting his ideals about becoming Absolute Evil – an entity that will cause humans to evolve by experiencing fear. The manga panels in chapter 166 also revealed Tareo passed out, signifying that Garou had truly lost sight of his objective, becoming a walking catastrophe under the control of the being, God. Then, Blast revealed his powers – dimension manipulation with the goal of forcefully ejecting Garou out of Earth. However, Blast’s plan fails as Garou copied his moves right before his very eyes attacking him in the process. Fortunately, Blast staves off his move by sending them to another dimension. This development then leads to the most shocking death in the series.

Genos, the student of Saitama, has been a major character in the One Punch Man series, serving as an S-Class Cyborg Hero. The Cyborg Hero admired Saitama and managed to secure a tutelage with the powerful B-Class Hero. However, presently, it seems that the Hero is no longer alive following the actions of Garou. Genos was already decapitated due to the effects of overstraining himself in the Monster Association arc. Regardless, Genos still threw himself at Garou since he was unaffected by the radiation due to his Cyborg nature. Despite his missing body parts, Genos still wanted to stop Garou with everything he got, revealing just how committed he is to the hero cause. However, Genos’s efforts were useless as Garou simply carried him around like a rag doll while countering the effects of Blast’s power.

At this point, Garou comes up with a nasty plan, hinging on Saitama’s true powers. He intended to copy Saitama’s powers when it was at the fullest to allow him to triumph over the B-Class Hero. However, there was a slight issue Garou needed to overcome: Saitama never truly revealed his true powers. To counter this minor obstacle, Garou decided to kill Garou to make him fully bring out his full strength. In the next instant, Garou’s hands thrust into Genos’s chest, causing blood to spill everywhere, coating the ground and the people around in the red liquid. If Genos did die, this might be the most shocking death in the series as no one saw this coming. Furthermore, this development will serve as a catalyst for the debut of Saitama’s true power.

Genos’s death then led to the appearance of a shocked Saitama on the battlefield with the blood of his student running down his face. Saitama then reminisces on one of his conversations with Genos. In the flashback, Genos praised him for always arriving right on time; however, Saitama rejected the praise, stating that he never arrives at the crucial moments. The next panel then shows a determined Saitama with blood running down his face. Finally, for the first time, Saitama gets serious in a fight as he executes the next move, Killer Move; Serious Series – Serious Punch.

So far, everything is going according to plan for Garou as Saitama reveals a significant fraction of true powers; enough for Garou to copy. Garou then copies Saitama right off the bat using the move, Mode: Saitama. As the two are about to exchange fists, Blast panicked visibly, stating that the effects of their clash will be enough to shatter the Earth. While the events in the next chapter of the One-Punch Man manga are still unknown, it will certainly host one of the biggest battles of the series, starring the determined Saitama & the Cosmic Awakened Garou.