Home Entertainment One Piece: Who is this man marked by the flame? 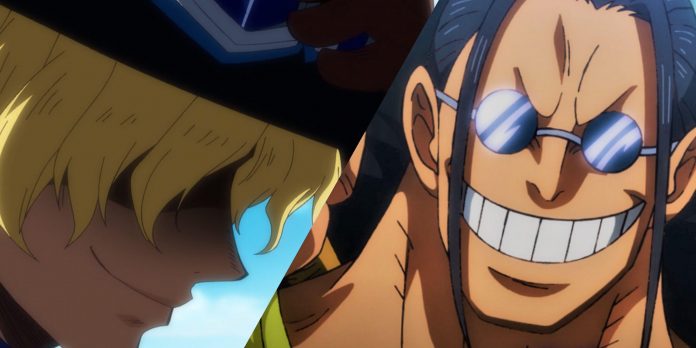 One Piece Chapter 1056 raised the curtain on a handful of mysteries, with one of them being regarding the future of the Shichibukai, who were active when the system was abolished. Towards the end of the chapter as the pirates were getting ready to leave, they were discussing their next destination, and it was during this time that Kid mentioned something that grabbed the attention of the readers. Kid talked about going after “the man marked by flames,” but he did not name the person.

Kid and Killer did highlight that the unnamed person was important and finding him would allow them to pull ahead in the quest to find the One Piece. Since then, the readers have been trying to figure out, who the person is and what kind of role he will play in the story.

The first One Piece character that comes to mind when talking about a “man marked by flames” is Sabo. Recently, it was revealed that Sabo has gained a great deal of popularity due to his heroics. He managed to save Kuma from the Marines, which was a huge victory for the Revolutionary Army. Sabo was given the title of the “Flame Emperor,” because of his devil fruit, which is the Mera Mera no Mi. The devil fruit has made Sabo stronger and has enabled him to fight powerful opponents without much difficulty.

Sabo has one known scar, which is around his left eye. He received the scar when he was still a kid, and he decided to set sail, but his ship crossed paths with the ship of a Celestial Dragon. The Celestial Dragon could not fathom the fact that an ordinary person was trying to go past his ship, so he launched a rocket at Sabo’s boat, which resulted in his boat being destroyed. Sabo received a scar near his eye and he also lost his memory. While Sabo does have a mark that is akin to a burn scar, it doesn’t make sense for Kid and other pirates to go after him because he has shown no interest in the One Piece.

Aokiji was the first Admiral to be introduced in the series. He showed his might when he defeated Luffy without any problems. Aokiji played a crucial role in the Navy’s victory over the Whitebeard Pirates. With the help of his Hie Hie no Mi, Aokiji managed to save hundreds of Marines by stopping the tsunamis caused by Whitebeard’s devil fruit.

After the war was over, Aokiji fought against Akainu for the position of Fleet Admiral. Sadly, Akainu proved to be too powerful for him as he emerged the victor. With this defeat, Aokiji left the Marines, and he ended up joining the Blackbeard Pirates. Aokiji does have scars over his body in different places, and he received them in his fight against Akainu. However, it seems unlikely that Aokiji could be a potential target considering he probably doesn’t have any information about the One Piece.

While Aokiji and Sabo have been the focus of several debates, either of them being the “man with the scar” is improbable. At this point, it seems highly likely that it might be a new character altogether. This makes things more exciting as introducing a new character at this point would change things entirely. Any new character that is introduced in the final saga is likely to be very powerful, and he will hold a great influence over the affairs of the world. It is also possible that the mystery man could actually be the person that Caribou is reporting to.

RELATED: One Piece: Things You Might Not Know About Sabo

Another name that has been flying around is that of Scopper Gaban. Scopper Gaban is one of the few big-time pirates, who still haven’t made their debut in the series. He was an integral member of the Roger Pirates, and he was the third-strongest member of the crew. Gaban traveled to Laugh Tale with the rest of the crew, and he has the necessary information needed to claim the One Piece. So, if the young pirates find him then he could lead them to the treasure.

Crucial Time In The Story

The other pirates in Wano have mentioned that going after the “man marked by flames” will get them closer to the One Piece. Luffy did ask about the enigmatic person, but no one disclosed the name. Law’s reaction made it seem like he knew the person that Kid was talking about. It will be interesting to see if the name of the person is revealed within the next few chapters or will the Straw Hats have to go and find the information on their own. It has been made clear that since the alliance achieved its goal of taking down the Yonko, they are all going their separate ways. This might sadden some fans since Law has been traveling with the Straw Hats since Punk Hazard, however, this will allow the other Straw Hats to get additional screentime.

It is fair to say that the decision to end the alliance comes at the right time considering the Straw Hats gained two new members— Jimbei and Yamato. Oda can give the other Straw Hats the necessary screentime before the all-out war starts. Before the pirates leave Wano, the readers will be hoping that Oda discloses all the secrets pertaining to the country and the Ancient Weapon, Pluton.

Predicting the best centers in the NHL 23