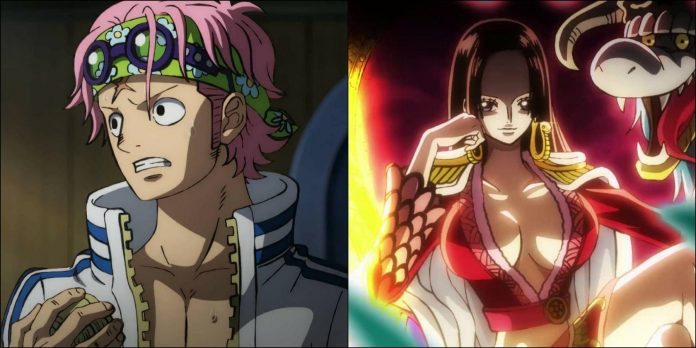 One of the most important events in the world of One Piece was the dissolution of the Citibukai system. The seeds for this were sown long before the timescale of the series, when Sir Crocodile, one of the former military leaders, tried to trample Arabasta into the ground. However, thanks to Luffy, the country was saved, and the threat that the Citibukai posed to some countries became obvious. After the timeskip Dress Rose faced a similar situation with Doflamingo, but in his case, the country has already suffered for more than 10 years.

Admiral Fujitora made it clear that his dream was the complete abolition of the Citibukai system. At the “Dreams” this idea was put forward, and the overwhelming majority of leaders supported this proposal, and all military leaders were deprived of their posts. Soon after, in One Piece 956, fans saw the consequences of the cancellation of this system. Kobi, in particular, was seen on the way to Amazon Lily. According to him, he was going to capture the pirate Empress Boa Hancock. However, the question remains, does Kobe have what it takes to defeat Hancock?

Hancock is an incredibly strong pirate, and even characters like Sengoku recognize this. Immediately after one trip as the captain of the Kuja pirates, she was awarded the title of Citibukai, and a reward of 80 million berries was placed on her head, which proves that she belongs to a very rare class of pirates. Being a warrior from Amazon Lily, Hancock uses Hacks incredibly. Her sisters, Marigold and Sandersonia, use some advanced forms of Khaki, such as Ryuo.

Hancock herself also commands the Color of the Supreme King, and it’s no surprise that she will be able to cover herself with this power, especially since the Kuja are the only tribe in One Piece that is known to have the skill of Khaki. Hancock, being the strongest in the tribe, surely knows how to use this ability. However, this is not all that it offers. Hancock also uses Mero Mero no Mi. Using this power, he can turn anyone who craves her into stone, as well as turn anyone and anything into stone upon physical contact, regardless of their attraction to her. Obviously, Hancock is one of the strongest characters in the whole story.

The power of Kobi

Kobi, on the other hand, is not that strong yet. He dreams of becoming an admiral of the fleet, but at the moment he has the rank of just captain of the Marine Corps, which is the same position that Smoker held before the One Piece timeskip. Kobi is also a member of a secret Marine unit called the SWORD. However, even there he is inferior to X Drake in terms of authority and power. Considering that there was nothing special about Drake during the Onigashima War, fans can imagine how strong Kobe is now. He certainly has great potential, as evidenced by the fact that one day he will become an admiral of the fleet. However, for him, a victory over Hancock is currently unlikely.

Another important aspect to pay attention to is Kobi’s ideals as a Marine. Oda carefully sowed the seeds of corruption in the navy, which are gradually revealed in history. Kobi is a man who always wants to fight for what is truly fair. During the Marinford War, Kobi tried to save the lives of pirates, despite being a Marine, because, according to him, the violence from the navy was excessive. Besides, Kobi’s mentor was none other than Garp himself, and he would certainly have informed the young Navy about corruption in the ranks of the organization.

That way, Kobi would know better than to attack an entire island of innocent people and former slaves. Besides, Kobi idolizes Luffy, and it’s no secret. Even Rebecca, Shirahoshi and Vivi were able to talk about it during the arch of Dreams. Hancock is also a big fan of Luffy, to the point of having feelings for him. The two could potentially form a partnership in one form or another.

If Kobi and Hancock really fight, it will most likely end with the defeat of the first one, since he clearly does not reach the level of the Pirate Empress. Provided that Kobi has support in the form of SSG, he can fight Hancock and capture her. However, given that Kobe is not a government dog, fans should expect him to find a solution to the problem by following his own model code.

Surely Kobi will not take the former slave back into slavery. At the same time, he cannot attack an island with several thousand innocent people simply because they are part of Kuj. Interestingly, fans know that a secret naval organization known as the SWORD is working behind the scenes, possibly against CP0, who act as a SHIELD. Thus, mutual understanding between Kuja and the Fleet SWORD is also possible.

A brand new developer is remaking the XIII remake