Home Entertainment One Piece: Is Momonosuke an ancient weapon? 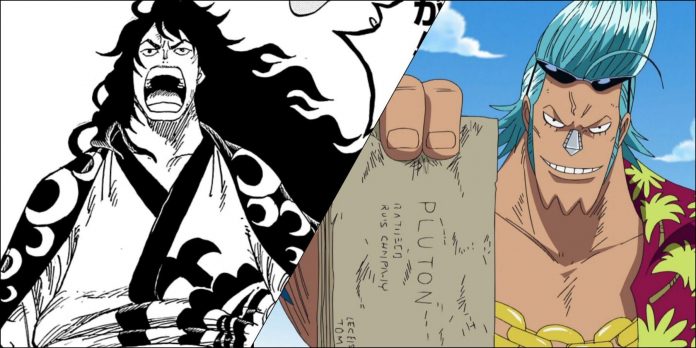 Momonosuke is one of the most intriguing characters in One Piece’s post time skip, especially the Wano country arc. Introduced in Punk Hazard as Kin’emon’s son who had accidentally eaten a failed Devil Fruit, nobody expected him to play a massive role in the series moving forward. With time, however, it was revealed that Momonosuke was actually destined to be the next Shogun of Wano Country.

RELATED: One Piece: Characters Who Can Rival The Yonko, Ranked

In One Piece’s Wano Country arc, Momonosuke’s importance shot through the roof and he has, since then, become a compelling character with a major role that goes even beyond his own arc. Not only did he face his fears with terrific bravado but he also earned the right to become the next Shogun of the country. Momonosuke is quite special and, as things stand, he might end up being far more special due to having ties to one of the Ancient Weapons – Pluton.

The truth about Momonosuke was revealed during the Zou arc, where his lineage as a Kozuki was brought forward to the fans. Momonosuke mentioned that he had, in the past, traveled with the likes of Roger on his ship. In the same arc, Jack launched an offensive on Zunesha and while both Luffy and Momonosuke could hear Zunesha’s screams, only the former was able to command it to defeat Jack. This power is extraordinary and goes even beyond the Voice of All Things.

Luffy attempted to talk to Zunesha but failed. At the same time, Inuarashi and Nekomamushi mentioned that both Oden and Roger were able to hear the same voice but, just like Luffy, they could not command the beast. Yet, Momonosuke somehow can and this ability is exclusive to him, which is a big indication that he is special indeed. Interestingly enough, Momonosuke is not the only one with this type of power and fans have previously seen someone with a similar ability during the Fishman Island arc.

Shirahoshi was introduced to the fans as the first Ancient Weapon during the Fishman Island arc. From her very introduction, it was clear that something about her was different as she was kept locked away and protected at all times. While a lot of this threat was attributed to Vander Decken IX, it was also to protect her true powers and to keep them from falling into the wrong hands. Shirahoshi is the Ancient Weapon Poseidon. Every couple of centuries, a mermaid is born on Fishman Island, and she holds the power to command all the Sea Kings.

This power is quite deadly and can potentially destroy the entire world. It is believed that during the Void Century, Poseidon was good friends with Joy Boy and made a pact with him where she would command all the Sea Kings to take Noah to the surface in order for the Fishman and Merfolk to live there. Unfortunately, Joy Boy failed to keep his promise which ties to the Poneglyph that he left in the Sea Forest.

Centuries later, Shirahoshi was born with the same power and, if guided by the next Joy Boy, she can help save the world. Fans already know that Luffy is the next Joy Boy and will eventually work together with Shirahoshi to destroy Fishman Island and take their race to the surface. Yet, Luffy does not possess the power to command Sea Kings. Similarly, Roger and Oden also did not possess this power despite being able to hear the Sea Kings’ voice. Shirahoshi is the only one who can and this is what makes her an Ancient Weapon. Clearly, this is quite similar to the power that Momonosuke possesses as he is the only one who can control Zunesha, despite others being able to hear its voice too.

How Momonosuke Ties To The Pluton

In the Wano Country arc, it was finally revealed that the Ancient Weapon Pluton slept within Wano country. Deep under the old Wano, the Ancient Weapon has been kept hidden since the Void Century, and to unleash it, one would need to destroy the borders of Wano and open the country to the world. Doing so will result in the Ancient Weapon being unleashed. Interestingly enough, in the Water Seven arc, it was revealed that Pluton was actually a warship and not a person. The shipwrights of water seven built the ancient ship on the island during the Void Century and it was likely used in the war against the 20 Kings. Unfortunately, the Ancient Kingdom lost their battle and the Pluton was buried under Wano until the next Joy Boy emerges to challenge the enemy once again.

While many think of Pluton being a warship to be a contradiction to the fact that Momonosuke is the weapon himself, that’s not necessarily the case. It must be remembered that only Momonosuke holds the power to control Zunesha and will most certainly be the only one who can control Pluton as well. As such, even though Pluton is a warship, Momonosuke would be the key to it just as Shirahoshi commands the Sea King who are her weapons. In that sense, Momonosuke possesses tremendous importance in the story moving forward as he is not only the Shogun of Wano, but also holds the power of an Ancient Weapon at his fingertips. Just as Oden once said, Momonosuke is peerless, and his terrific power certainly goes on to show that.