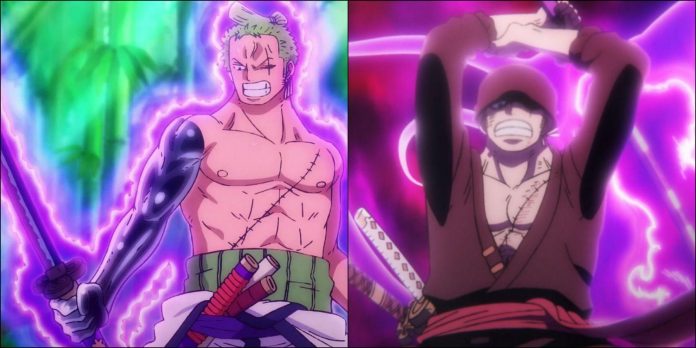 Zoro from One Piece is a member of the Straw Hat Pirates and an incredibly strong fighter who wields three swords in battle. From an early age, he trained in a dojo in the village of Shimotsuki, where he learned fencing under the guidance of Koshiro, a dojo master. By the time his training in the village was over, Zoro had mastered the Three Swords style and acquired the Wado Ichimonji, a powerful O Wazamono-level sword, from Koshiro. With Wado Ichimonji, he sought to fulfill the promise of a lifetime given to Quina and become the greatest swordsman.

Zoro became extremely skilled and advanced his skills so much that he even earned the praise of someone like Dracul Mihok, the strongest swordsman in the world. During the two-year timeskip, he only got stronger and stronger and acquired even greater skills, further enhanced by his ability to use Hacks. Although all this, of course, already makes Zoro a phenomenal swordsman, it was only in the “Vano Country” arc in One Piece that he took the biggest step towards his dream of becoming the greatest swordsman in the world, and all this happened thanks to a new acquired sword that once belonged to the legendary Kozuki Oden– Enma.

What is the Enma Sword?

Created by none other than the legendary blacksmith Shimotsuki Kozaburo, Enma is one of the 21 swords of the O Wazamono level that exist in the world of One Piece. Kozaburo forged his sword when he was in Vano, and until the day of his death, he remembered this blade as his greatest creation. According to Kozaburo, Enma is a sword whose character is deadly serious. Just holding this majestic blade in your hand sent chills down your spine, which only shows how powerful this sword really was.

Being the greatest creation of Kozaburo, Enma eventually became a blade with great power and earned a reputation for being able to cut to the bottom of hell, which is another testament to his ferocious strength. Kozaburo named this sword Enma, as it has the power of the King of the Underworld. Only the truly strong can defeat this sword, as it is extremely difficult to master.

Enma is a special sword that, unlike any other blade in the series, drains the Hacks from the user’s body. For any average samurai, holding Enma for just a few minutes would mean death. However, for experienced users, Enma is a weapon that can only increase their strength when tamed.

However, taming this sword is easier said than done. For Zoro, taming Enma took quite a long time, and even after several days of training before the Fire Festival and the raid on Onigashima, he could not master her abilities perfectly. Finally, by allowing Enma to absorb as much Haki as possible, Zoro was finally able to take the next big step as a swordsman and defeat even someone as strong as the Wildfire King of the Beast Pirates, a man worth 1,390,000,000 berries.

Although Enma is currently wielded by Roronoa Zoro, he was not the first to use this powerful blade. For many years, this blade was used by the strongest samurai of the country of Vano, Kozuki Oden. It is believed that Oden owned both Emma and Ame no Habakiri from an early age – a feat that is certainly not so simple, and it only shows what a monstrous samurai he was even as a child. Over the years, Oden has become incredibly powerful with this blade. Facing blades with the likes of Belous, and fighting for supremacy with Roger, Auden only became stronger over time. By the time he returned to Vano, he was several times stronger than he was when he left, and his fencing skills were also at their peak.

In the end, he fought Kaido in battle and, using Enma’s power, was able to scar him and almost kill him. This is a grandiose feat that no one else in the world of One Piece was able to achieve at that time. After an unsuccessful defeat by Kaido, Oden handed over Enma to Hiyori, his daughter. 20 years later, Roronoa Zoro visited the land of Vano with the Straw Hat Pirates and eventually traded Shusui for Oden’s favorite blade, Enmu.

Under Zoro, Enma was a real beast and sucked more Khaki out of his body than needed. Thus, it took him quite a long time to master it. Even when he was fighting Kaido on the roof, Enma wasn’t completely tamed. After receiving a pretty hellish defeat from the Wildfire King, Zoro finally figured out how to handle a sword. By allowing him to suck the Khaki out of his body unhindered, he was able to master the sword forever. At the same time, Zoro also allowed the blade to manifest the Conqueror’s Hacks and use his advanced form. Enma’s only downside was that Zoro couldn’t fight for long using this sword, as the amount of Haki it sucked out of his body was simply too much.

Ever Given in Microsoft Flight Simulator

Beetlejuice: 10 other Burton works that would be great on stage