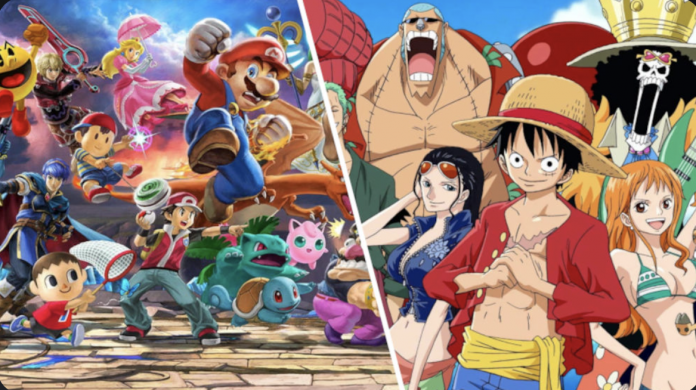 Eiichiro Oda, creator of One Piece, dedicated an illustration to Super Smash Bros. It is not official but it is a quite evident tribute

One Piece is close to turning 25 and Super Smash Bros. is already over 22. Both are franchises that, despite coming from different media, anime and video games, respectively, have survived the test of time.

This is how they have become pop culture references, appearing in works by other creators. Sometimes in a very veiled way and at other times in a more open way. But what if they could mix?

That is precisely what the creator of One Piece, Eiichiro Oda, did. What happens is that in the most recent edition of Shueisha’s Weekly Shonen Jump magazine there is a new illustration from this mangaka.

It is a double page in color that serves to decorate the section where the most recent chapter of the manga comes. In this case, it’s 1,028. Nami and Usopp can be seen enjoying what appears to be a fun game.

It is a parody of Super Smash Bros. Monkey D. Luffy, characterized as Ken from Street Fighter, can be seen beating up Franky, who is wearing a Donkey Kong costume.

Likewise, there is Roronoa Zoro in a Link suit, armed with a sword and shield, attacking Tony Tony Chopper. The latter wears a very rare costume. There are those who believe that it is a parody of Charizard, but it is more reminiscent of a monkey. Could it be more like Diddy Kong?

One Piece, Ch. 1,028: Powerful forces take notice of the battle raging in Wano. Will it affect the outcome? Read it FREE from the official source! https://t.co/d9aZ8KtCFA pic.twitter.com/Enn6ByG9ld

This tribute has references beyond the Nintendo game

Jinbe also appears in an outfit that is undoubtedly inspired by Mario from Super Mario Bros. and Sanji… it lends itself to interpretation. He certainly carries a Splatoon weapon, but the one I brought from him is something different.

Some think that he is inspired by the Star Fox franchise. In another part of the image you can see Nico Robin and Brook. She wears an outfit reminiscent of Morrigan Aensland from Darkstalkers. Will it be a reference to Kazuya Mishima from Tekken?

As for Brook, it is not entirely clear. There are some who link him to Demitri Maximoff … but he doesn’t wear such an outfit. In fact, he is more reminiscent of Dracula’s outfit in the Castlevania series.

This villain is one of the bosses in Super Smash Bros. Ultimate. The fact is that the creator of One Piece decided to be creative by doing this tribute, not based only on what the Nintendo series offers, but he decided to go a little further.

Lucifer: 10 times when Lucifer and Chloe were the perfect couple