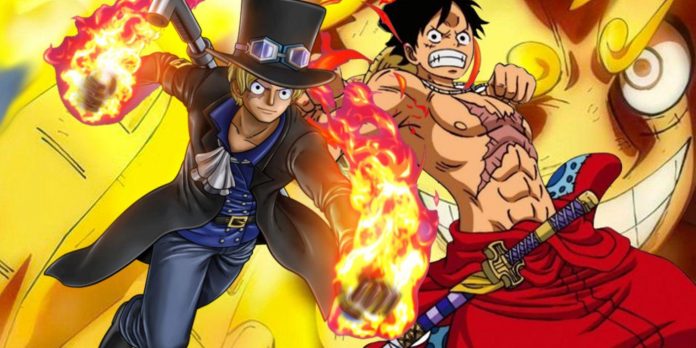 Warning: Contains spoilers for One Piece #1054!

The family of Luffy, the protagonist of One Piece, is becoming more and more dangerous as Sabo, the brother of Captain Straw Hat, is now revered around the world for his exploits as commander of the Revolutionary Army. After it became known that Luffy possesses the powers of the ancient god of freedom Niki, the fact that Sabo is now known as the “Emperor of the Flame” means that the tyrannical World Government has to fight against two “gods”.

Sabo is Luffy’s named brother. Together with Ace, the trio grew up in the Kingdom of Goa, dreaming of becoming pirates. However, Szabo was allegedly killed while trying to escape from his aristocratic and violent family. In fact, he was saved by Monk D. Dragon, Luffy’s biological father and leader of the Revolutionary Army, who raised him to become his deputy. Years later, Szabo and other Revolutionary Army commanders infiltrated Mari Joa during the Level, the pinnacle of world monarchs, to rescue their friend Kuma, enslaved by the Heavenly Dragons (the highest ranking World Nobility). They were opposed by two admirals — Ryokugyu and Fujitora — and only recently the outcome of that battle became known.

After previously teasing that Sabo was killed, chapter #1054 of One Piece revealed that the rescue mission was successful and the commanders managed to deliver a strong blow to the Heavenly Dragons. Sabo’s actions caused such a resonance that he is called the “hero of the whole world” and the “Fiery Emperor of Sabo” because he ate Mera Mera no Mi, a fire-based Devil fruit that his late brother Ace once owned. Szabo is also accused of murdering King Cobra Arabasta, a descendant of one of the twenty nobles who founded the World Government. Even if this is unlikely, Szabo inspired revolutionaries around the world to overthrow their monarchs, and now they worship the boy as a god.

This turn of events is even more important because it happened shortly after it became known that Luffy possesses the powers of the “Sun God Niki”, a mysterious mythical figure from the past who was worshipped by slaves as a liberator. The similarity between the two brothers cannot be a coincidence. One Piece has a strong recurring symbolism, especially in relation to the Sun and related concepts such as “dawn” and “fire”. They always have very positive connotations, usually associated with freedom and liberation from oppression. Sabo and Luffy are both “liberators” in their own way, who have helped countless people around the world. The fact that they are both characterized as “gods” now puts them on a direct collision course with the cruel Heavenly Dragons who call themselves “gods of this world”.

Considering that Luffy and Dragon also carry the mysterious “Will of D.” is considered the “natural enemy of the Heavenly Dragons”, together with Sabo, this family now poses the most dangerous threat to the World Government. The world of One Piece is fast approaching a huge war, and fans can be sure that the Luffy family will be at its center.

Red Velvet: Will All The Members Renew Their Contract With SM?