Home Entertainment One Piece: 10 of the Most Dramatic Battles in the entire manga 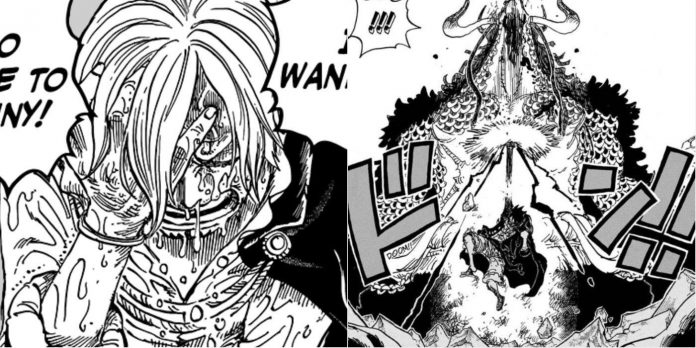 One Piece’s Wano arc had its fair share of amazing battles that were both intense and dramatic with the final fight of Luffy vs Kaido ending with an explosive punch in Chapter 1048, sending Kaido all the way down into a chamber of magma.

While the Wano arc reached a stunning conclusion with the last of its epic fights, there are plenty of others throughout the series that help define One Piece for its unique battles involving Devil Fruit abilities, Haki, and/or swords. Here are 10 of the most dramatic battles in One Piece from the Baratie arc to the Wano arc.

Zoro’s dream is to become the world’s greatest swordsman and in what could be described as luck, he was able to have his chance at fighting the man with that title — Dracule Mihawk.

RELATED: 10 Real Pirates That Inspired The Creation Of One Piece Characters

Zoro is a skilled swordsman, no doubt, but he was nothing compared to Mihawk who fended off Zoro’s three swords with a single knife. In the end, Zoro is defeated soundly. This fight is intense and despite being one-sided, it’s a breathtaking battle to behold. Zoro’s bravery is duly noted as he turns to Mihawk, saying scars on a swordsman’s back are shameful. Mihawk then defeats Zoro and Zoro vows to never lose again.

In the East Blue Saga, Luffy versus Arlong is easily the most dramatic fight. The buildup of emotion from one of the most tragic backstories in One Piece, Nami asking Luffy for help was intense and gave readers attachment to these characters.

As the fight goes on, Luffy sees more of the horror that Arlong had put Nami through by forcing her all her life to create maps for the Arlong pirates. Luffy destroys the room and proceeds to give fans an intense battle where Luffy comes out on top and destroys the building of Arlong Park.

Zoro versus Mr. 1 is still regarded by many fans to be Zoro’s best fight, although many have changed opinions as of late due to his fights in One Piece’s Wano arc.

Zoro versus Mr. 1 was intense, with Zoro dripping blood and suffering injury after injury from this bounty hunter. Zoro’s goal in this fight is simple — to be able to cut steel. As he reflects on past teachings from his master and focuses on the breaths of the objects around him, he learns how to choose what he wants to cut and not cut. In a final incredible moment, Zoro slashed through Mr. 1 with a single blade, mastering an incredible technique.

The Straw Hats were rarely at each other’s throats. Robin and Sanji both defected at one point, but they did it for selfless reasons. However, Usopp’s faceoff with Luffy was far different as he fought against Luffy in his denial that the Going Merry was finished.

RELATED: 10 Crucial Pieces Of Lore Every Fan Needs To Know In One Piece

Usopp impressively put up a phenomenal fight against Luffy, knowing his captain well. However, there was never a chance for him to defeat someone so much stronger than himself. Fans read on sorrowfully as they watched this dramatic battle unravel, seeing two best friends fight. It was a sad moment that made fans wonder if this was really the end of this friendship.

Luffy overcame his limits and sacrificed his own lifespan in order to save Robin and defeat Rob Lucci. By all logic, Luffy should have never been able to topple this CP agent. But this fight simply showed what lengths Luffy was willing to go to save one of his crew members.

In her desperation, giving fans one of the most emotional quotes in One Piece when Robin cries out that she wants to live. Stopping at nothing, Luffy does everything he can to fulfill that wish and succeeds.

In what initially seemed a heartbreaking battle was the struggle against the Warlord, Bartholomew Kuma, one of the most powerful Warlords in One Piece.

Try as they might, the Straw Hats could do nothing as they fought against the Warlord. Luffy watched in absolute horror as his friends were teleported to other locations, believing they died. This fight is dramatic not because of any impressive feats, but because of how fans see Luffy in complete despair and terror. In the end, it turns out Kuma saved them, but the moment was no less dramatic.

There isn’t a single fight that does Marineford justice in being dramatic as the entire event is. This arc contains some of the most intense, incredible, and emotional scenes in the entirety of the series.

Ace’s death was an event that shook the world and Luffy to the core. His depression skyrocketed, so much that he was paralyzed with shock. Seeing Ace cry and thank everyone for loving him was far more heartbreaking than fans could imagine and the complete rage fans witness from Whitebeard as he fights against Akainu is just as dramatic as any other fight.

Luffy vs Doflamingo is an incredibly long fight, but one of the most emotional and intense fights. Luffy goes to far lengths to protect those such as Bellamy and Law, stopping Doflamingo in his tracks.

This is the first battle fans get to see two wielders of Conqueror’s Haki battle and with Doflamingo having his Devil Fruit awakened on top of this, it was impressive Luffy won at all. Doflamingo is fought several times with both Law and Luffy, but it’s really Luffy who defeats Doflamingo. For Law, Doflamingo seemed like an impossible obstacle to pass. But Luffy avenges what Law had lost and saves his fellow pirate.

Luffy vs Sanji is the other fight where Luffy fights against another Straw Hat. However, this fight is much different than the other. Luffy refuses to fight back, knowing that Sanji feels far more pain in what he does than Luffy.

RELATED: What Each Straw Hat In One Piece Smells Like According To Oda

The fight is brutal, with fans’ hearts pounding quickly as they see their beloved captain being beaten by a close friend. Sanji goes to extreme lengths to keep up his act for Germa 66 and Luffy remains loyal, swearing to Sanji that he wouldn’t eat again until Sanji made him food. Eventually, Sanji does give in later and breaks down crying as he tells Luffy he wants to return to the Thousand Sunny.

In One Piece’s most recent battle and the conclusion to the Wano arc, Luffy took down Kaido once and for all. Luffy and Kaido’s battle was a long one, with Luffy constantly getting put down and coming back for more.

What changed the tide was a moment One Piece fans will long talk about: Luffy awakening his Devil Fruit. Luffy defeating Kaido was the most dramatic battle yet in One Piece as he defeated a Yonko, attaining the rank for himself, and freeing the country of Wano.