Home News One of the greatest mysteries of the center of our Galaxy has... 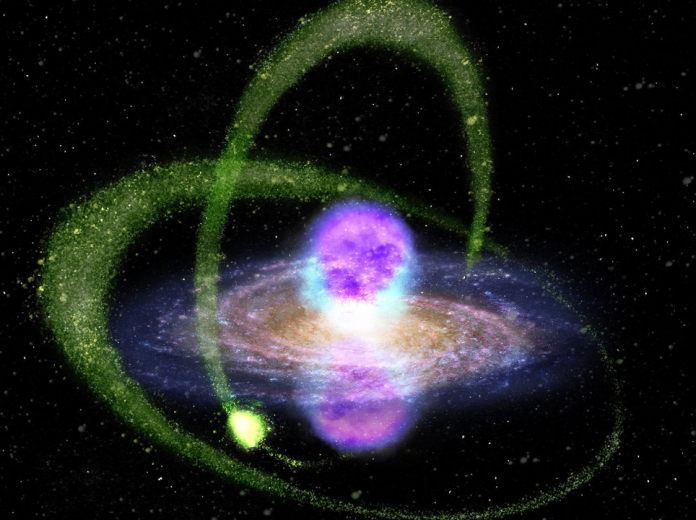 Scientists have managed to find an explanation for one of the greatest mysteries of the center of our galaxy. The radiation source of the Sagittarius galaxy satellite has been found.
While the research of dark matter, one of the biggest mysteries of the cosmos, continues rapidly, new news has come from the scientific world today. According to a study published in the journal Nature Astronomy, scientists have found an explanation for the mystery of the satellite galaxy Sagittarius inside the Milky Way Galaxy.

The new discovery provided evidence against the theory of dark matter, which astronomers have long supported. So what was the theory? What does this discovery tell the world of science? Let’s look at the details.

Let’s first explain what the mystery is:

In the center of our galaxy, a pair of gamma-ray bubbles are visible, represented by purple segments in the image above. Although this phenomenon was discovered ten years ago, its origin remains a mystery. These radiation bubbles were called “Fermi bubbles”.

One of the brightest areas in the southern part of these bubbles has been called the “Fermi cocoon”. This structure can be seen at an enlarged scale in the image above. It was once believed that the structure in question was the result of a supernova outbreak in our galaxy.

This structure was actually the result of radiation emitted by a satellite galaxy:

By studying the data obtained from the GAIA and Fermi space telescopes, scientists were able to identify the source of the structure we mentioned above. It was announced that the source of the word “Fermi cocoon” comes from the satellite galaxy Sagittarius.

So what is the source of Sagittarius gamma radiation?

It was believed that gamma radiation from the galaxy had several possible causes, since there was no gas or stars in Sagittarius. Millisecond pulsars, which are considered one of these causes, are beginning to be characterized as the biggest explanation for the new discovery. On the other hand, this evidence also contradicted another theory that the radiation comes from dark matter.

What is a millisecond pulsar?

Pulsars are described as the core and “heart” of the celestial structures in which they are located, and are neutron stars that send radio waves into space like a heartbeat. On the other hand, millisecond pulsars are pulsars with a rotation period in the range of about 1-10 milliseconds. A widely accepted theory of the origin of these pulsars is that they were accelerated neutron stars due to the accumulation of matter from very rapidly rotating almost double binary stars.