Home News One Fish Sold at Auction for 193.2 million Yen 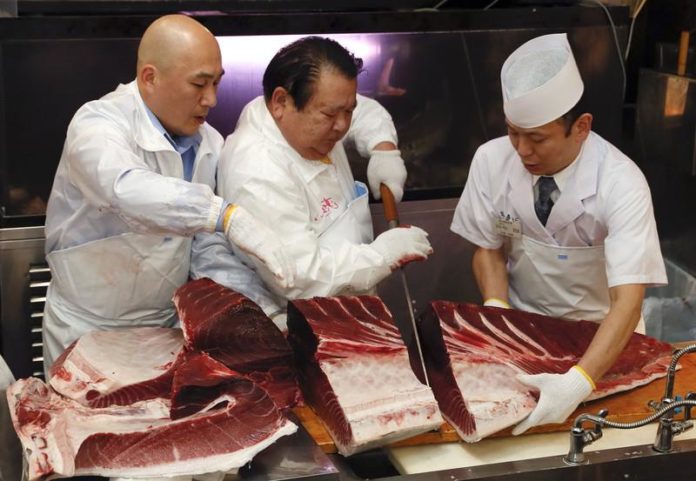 The traditional fish auction, held annually in Japan, took place at a fish market in Tokyo this year. This year, a bluefin tuna was sold to Yen 193.2 million.

Traditionally, a fish auction opens every year to celebrate the new year in Japan. Many fish were sold at the auction held at Toyosu Fish Market in Tokyo to celebrate the New Year this year, but one of them has become the most expensive fish of the traditional fish auction event this year. At about 05:00 in the morning, dozens of fish auctions were launched in auctions that were sold in an auction and the highest price among them was given to a tuna fish.

A bluefin tuna catches buyers for Yen 193.2 million. Blue fin tuna fish sold after the last auction, which is 276 kilograms of weight was specified. Aomori in the northeast of Japan, a fishing boat caught in the province of tuna fish price of about 700 thousand Yen was announced. The winner was Kiyoshi Kimura.

Purchasing record at Kimura
Kiyoshi Kimura, who made the most expensive purchase of the auction held in Japan this year, is known as the “King of Tuna yüzünden because of his record offers for tuna fish in the auctions held for years. Fish restaurant operator Kiyoshi Kimura made Japan’s second most expensive sale this year with 193.2 million yen of fish purchased. This is not the first auction by Kimura, who broke the record of 2020.

Kimura, who made the most expensive purchase in 2020 and the second most expensive sale in the history of Japan, played the leading role in the highest-priced sales in the country’s history. Kiyoshi Kimura, who also bought a tuna in the auction last year, paid Yen 333 million, the highest selling price in the country’s history.