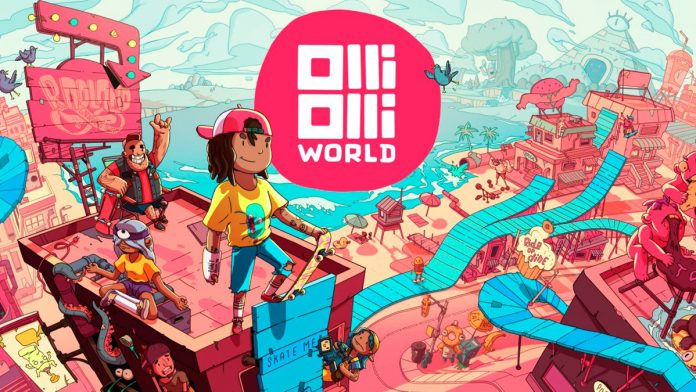 OlliOlli World: We played a demo of the new title in the Roll7 saga; a more platforming, colorful and varied approach. A much more versatile and connected delivery.When Rollingmedia Limited (Roll7) founded Rollingmedia Limited (Roll7) in 2008 by a group of London friends who were passionate about skateboarding and experienced in software development, they did so with minor commissions as commissioner; They did not have the ability to create those works that they so often imagined in their heads. After five years of experiments, learning and adaptation to the mobile world, OlliOlli arrived in 2013 as one of those games that we now link almost automatically with PlayStation Vita; that’s why it lent itself to playing it in portable mode. A kind of Tony Hakw’s Pro Skater in side scrolling based on challenges, forcing you to calculate each jump and taking advantage of every tenth of a second in the air to do more than 120 maneuvers. Online rankings, a multitude of content and an addictive gameplay like few others.

Later, its sequel, the phenomenal OlliOlli2: Welcome to Olliwood. The result? More than 75 international nominations and awards, including the BAFTA award for the best sports game of 2015. And that’s how things remained. A couple of titles recommended a thousand times; available on virtually any platform. But what could be the next step? OlliOlli World will be born in 2021 not so much as a third part, but as the beginning of something new, bigger, more platform and aware of current times. Above all, true to style.

OlliOlli World, a concert where everything sounds great

“We realized that our game was visually functional, instead of visually incredible,” acknowledge its creators in the digital presentation of the game to media. And that’s right, OlliOlli and OlliOlli 2 worked on what is truly the most important thing in a video game, its playability. Adapting to three-dimensionality through 2.5D feels like the best possible idea to play with layers of depth on stage, as it already happens in many works of the platforming genre. There are times when a visual change impacts mechanics as well, and OlliOlli World has grown in the right direction.

Let’s take action and start at the beginning: what is OlliOlli World. Broadly speaking, we go back to having platforms, action and skateboarding, in that order. And it is important, because, although this installment focuses on the tricks, in which you repeat each phase over and over again until you improve your score, it also wants you to live a journey like the ones in Donkey Kong Country when you got on the bandwagon in the levels of sheet. Saving the distances, of course, but here we have come to tell you about sensations after having been able to play the first two worlds of Radlandia, where this huge spiritual reset takes place. Frenetism, light, color, risk.

After a brief presentation, both plot and at the controls, we went on to play. A multitude of levels arranged on a map with worlds, each one with its own theme and with new mechanics every time. And you say, mechanical? Isn’t this just jumping and skillful tricks? Not quite. Roll7 has done a weighted job when it comes to posing each world. Both in the aesthetic and in the merely conceptual, each phase has its objective and its idiosyncrasy. For example, some focus on you doing stunts by sliding on a bar; others, who have loved us, bet on sliding you down the wall for a certain time. Others even have alternative routes, change direction and hide secrets. Or they have stores in depending on what areas.

OlliOlli World wants to express itself with a more varied and universal language, it seeks to be many things at the same time and it deceives you without you realizing it, in a good way. It is OlliOlli, the same as always, but now there is something more in his effort to be a video game. He has plenty of personality and adapts to the style of each player. You have so many actions and movements at your disposal that customization goes far beyond the cosmetic. Although for now we have not been able to delve much into that configuration of the character, we can change the outfits with dozens of suits, shoes, etc. All this thinking that this title is going to be broadcast on Twitch, that the experience is not going to be reserved only to the online leaderboards. OlliOlli World wants you to feel it, but it also wants you to share it.

It is only a couple of hours that we have been able to play, so we do not want to draw conclusions ahead of time. For now, the sensations are very good; Not only because it responds to those who wanted an OlliOlli 3, but because it also addresses those who for whatever reason did not find the previous ones attractive. The gameplay is refined, adaptable, and feels millimetrically calculated; we have new missions, secondary tasks, rewards and tricks everywhere without requiring too many commands. The core axis at the controls resides in the joysticks. Likewise, the studio works in a sandbox mode where you can train without limits, there will be online leagues and more than 100 movements. The only question that arises is whether with the passing of the hours the guy will hold out in his campaign mode and if his difficulty curve will be well measured, since the feeling of repetition is a double-edged sword. It is a complex and demanding work, which bases its learning on trial and error. It does not give concessions. Its structure needs to grow proportionally.

Roll7 is not bluffing and wants OlliOlli World to be one of the greats of the independent scene this year 2021. Without a doubt, he is aiming for it. The game is scheduled to launch this winter by Private Division. We can enjoy it in Spanish, among many other languages, on PS4, PS5, Xbox One, Xbox Series, Nintendo Switch and PC.

Ozark: After the end of the drama fans rate the best...

How to Watch Southern Charm Season 8