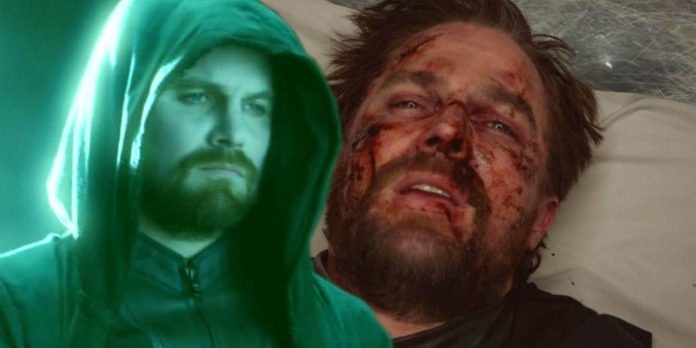 The latest Arrowverse crossover comic has just ended with a significant discovery, as the Ghost of Oliver Queen was seen alive in 2049. It seems that somehow the Queen has returned after her death in the CW’s Crisis on Infinite Earth. Disclosure leaves more questions than answers, but the canonical comic ultimately changes the fate of the hero.

Stephen Amell was the CW’s Green Arrow in Arrow, with the character discovering the Arrow universe on the small screen. However, after eight seasons, Oliver Queen’s story ended unexpectedly when he died twice during the “Crisis on Infinite Earth” crossover. First, Green Arrow was killed trying to save Earth-38. Then, after being resurrected as a new DC Ghost, he died again, saving the Multiverse, as his sacrifice played an important role in preventing its destruction. The unexpected ending for Queen in this event seemed to be the end of his story, but now the Queen’s Ghost is back and alive in the DC future.

In Earth-Prime: Hero’s Twilight #6 by Jeff Hersh, Thomas Pound, Will Robson, Alex Sinclair and Tom Napolitano from DC Comics, the heroes of Arrowverse 2049 stop the villain Magog and his evil army as they are considered worthy of a shadow figure. After the battle, Supergirl returns to the Hall of Justice, revealing that Flash, Superman, Black Lightning and others have been watching the young heroes since they were ordered not to interfere with the trial. A mysterious voice responds by saying that the ordeal “pales in comparison to what is expected of them” as Oliver Queen’s ghost, somehow alive, reveals himself, saying they “have to be prepared” for what comes next.

The Arrowverse comic book crossover is canonical in the CW television universe, so seeing Oliver Queen alive is a sight to behold. Although Stephen Amell mentioned that the door will never be completely closed after the return of the hero, the fact that he was returned already in the canon is a complete surprise. In addition, the story ending with the tagline “The end… for now” seems to suggest that they have plans for the future for the hero, whether in comics or on the small screen.

It will be interesting to see what happens to the Arrow universe now that Oliver Queen’s Spectrum has turned out to be alive, despite numerous deaths in the CW crossover with live actors. Does his comical return hint that Amell might get another chance at the role? Or will the adventures be contained in the comics, although they are still canonical? Unfortunately, much is still unknown about the fate of Oliver Queen, as readers and viewers need to be patient to find out what will happen next. Earth-Prime: Hero’s Twilight #6 from DC Comics is already in comic book stores.