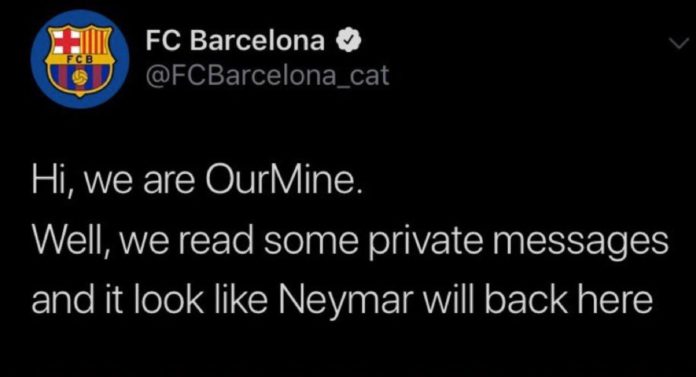 A hacker group called OurMine captured the official Twitter accounts of FC Barcelona with 32 million followers and the Olympics with 6.1 million followers. After this vulnerability, Twitter locked the relevant accounts for a while.

Our hackers group named OurMine, which was known for its large seizures, took over the official Twitter accounts of the Olympics and FC Barcelona this time. While the incident was verified by Twitter, the hacked accounts were temporarily suspended.

Hacker group said the famous football player Neymar will return to the club:
“Hello, we are OurMine. We have read some private messages and Neymar seems to be back.”

OurMine hacker group, which took over the official Olympics and FC Barcelona accounts, said in a post from the FC Barcelona account that they had read some private messages and that the famous football player Neymar would return to the club. The hacker group also stated in a post from both accounts that everything can be hacked and that the relevant organizations can contact them for the security of the accounts.

Our hacker group, named OurMine, constantly targeting high-profile accounts on Twitter, started to raise the question of “Is there a vulnerability on Twitter”? While the company has not made an official statement about these successive events for now, it was enough to lock only the hijacked accounts.

The reaction of the sports world to Shakira’s Saturday news