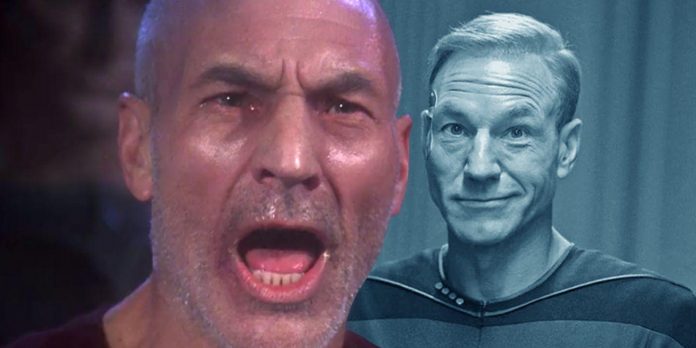 The announcement of the long-awaited 400th issue of the Star Trek comic book series was accompanied by an inspiring and unusual cover. One in particular pays homage to a funny joke in the fandom: the chignon of the noble captain Jean-Luc Picard.

Sir Patrick Stewart, who plays Picard, has an interesting story with the character regarding hair. He was almost not chosen for the role of captain, because the creator of “Star Trek” Gene Roddenberry did not think that the bald captain Picard corresponded to his vision of the character. Roddenberry agreed, but only if Patrick Stewart wore a wig to the audition. Stewart put on a wig and auditioned. Fortunately, he was chosen for the role, and he was told to forget about the wig. Fans around the world will rejoice and celebrate this decision to leave Stewart bald when a photo of Captain Picard in a really terrible wig went viral and Wheaton responded to one of the covers of the collection in the lower right corner. The presented wig is made in the style of the wig that he was originally going to wear as a character.

Now a new version of J.K. Woodward’s cover for the 400th issue of the IDW Star Trek series returns Picard’s hairstyle. This 400th issue features various authors, including Wil Wheaton of The Next Generation, and will feature stories of different iterations over the years of the USS Enterprise and its crew. The special issue is a collection featuring a wide variety of stories from a wide variety of authors, so while it’s not confirmed, it’s possible that one of the stories will feature a previous version of Picard with much more hair. than Trek fans are used to. Woodward previously drew for Star Trek: The Next Generation: IDW 20/20, which took place long before TNG, and also saw Picard with a full head of hair.

Regardless of whether Picard appears in a wig in issue 400, it’s undoubtedly a fun nod to fandom. The image of Picard in his pathetic wig, which spread on the Internet, turned Picard with hair into a walking joke for fans of the series. The most famous image of Picard with hair comes from the 12th episode of the 5th season of “Violations”, which has memories of a young Picard. Not a headshot from an audition, as rumored earlier. References to Captain Picard’s hair are also present in the 7th episode of the 6th season of “Scammers”. In the episode, there is an accident with a transporter that brings them back to the children, and Picard immediately checks his scalp. It is such small details that fans of “Star Trek” will see in this lovingly created anthology dedicated to the series.

This legendary new anthology is a must-have in any Star Trek fan’s comic book collection. Wil Wheaton promises to provide the level of detail and care expected from such a project, not only with a compiled list of authors, but also with attention to detail, such as Captain Jean-Luc Picard’s chignon.