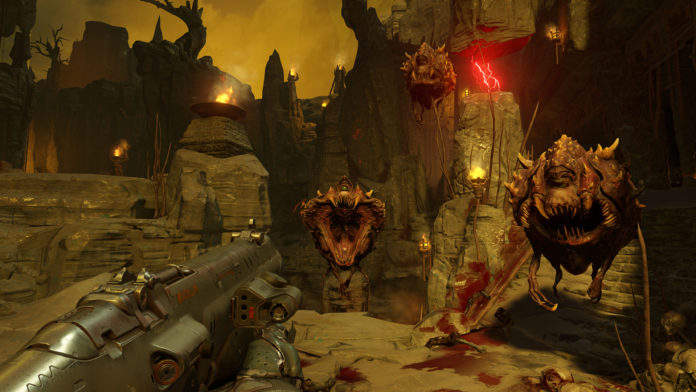 Bethesda has released screenshots of the new game DOOM Eternal, which DOOM fans have been eagerly awaiting. The images show that the game using the id Tech 7 engine will come up with really cool graphics.

One of the highly anticipated games of 2020 is undoubtedly DOOM Eternal. Actually, the game, which is expected to be released in November 2019, has unfortunately been one of the first victims of the postponement trend that has become trending recently and the release date of the game was postponed to March 2020. Despite this, the players who do not lose hope about the game continue their curious waiting.

Broadcasting company Bethesda, who wants to get a bit of this curious wait of the players, has released a series of new screenshots showing what to expect in the game during the day. Using the id Tech 7 game engine, DOOM Eternal will come with really great graphics, given the screenshots.

DOOM Eternal seems to maintain its DOOM style in 2016:
We can see some places and enemies in the game in the shared images. At this point, we get an answer to a question that keeps the minds of the players and we can see that the DOOM style in 2016 is preserved in the game. Enemies have a design similar to the previous game, but most likely, the characters will appear with clearer lines than before.

As far as we can see from the images, DOOM Eternal seems to enchant players with its renewed graphics that previous promotional trailers were also hinting at this. If you want to see the images, you can use this link and take a look at 12 different images that give clues about the DOOM Eternal universe.

Cooperating with NVIDIA on the PC side of the game, Bethesda recently announced that real-time ray tracing will be supported in the new DOOM game. However, before we conclude our news, let us remind you that DOOM Eternal will be released for PC, PlayStation 4, Xbox One and Google Stadia on March 20, 2020.