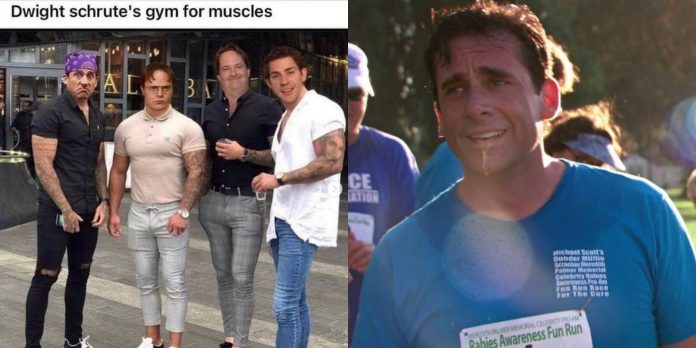 Steve Carell has been one of the busiest men in Hollywood since the ending of The Office almost a decade ago. Aside from starring in The Morning Show, The Big Short, and, Space Force, Carell is also preparing for Despicable Me 4 and Hulu’s The Patient. More recently, it’s been announced that Carell was replacing Bill Murray in the upcoming film Asteroid City.

Despite all of his new projects, Carell will forever be known as the lovable, gullible, and obnoxious Michael Scott from The Office. Over the years, fans of the series have kept his character alive through the art of memes, and some are so spot-on that they perfectly sum up his character.

Michael Scott Was The King Of Misunderstandings

@The_Office_Antics shared a meme that described Michael Scott perfectly. Michael wasn’t a dumb character per se but there were plenty of times when he didn’t fully understand the severity of various situations or conversations.

RELATED: 10 Unpopular Opinions About Michael Scott, According To Reddit

Examples of this were when he was a part of Jan’s deposition, when Dwight was lying to him about going to the dentist, or when Donna cheated on him. Carell’s impeccable acting always showed the moment Michael realized he misunderstood the conversation far too late into it. It’s an unpopular opinion to hate Michael’s misunderstandings because they always created amazing scenes (and memes).

Michael thought he was hilarious and that he knew what real comedy was like. Viewers saw this through Michael’s alter egos, impressions, and standup routines. What Michael didn’t always understand was that his style of comedy wasn’t always appreciated by his coworkers in the workplace.

This meme by @TheOffice.Rules summed up Michael’s character because if he met someone who didn’t appreciate the PBS documentary he was a part of for seven years, he would chalk it up to them not understanding the level of humor he was accustomed to.

Michael Was One Of Dunder Mifflin’s More Loyal Employees

When it came to employees, no one was more loyal than Michael Scott. He stayed with Dunder Mifflin for almost 20 years and asked for a raise once in that time span. Even though David Wallace and the like almost shut down the Scranton branch multiple times and didn’t show Michael the respect he deserved, he stayed true to Dunder Mifflin.

There eventually came a time, however, when Michael knew when he was no longer needed or respected. Although David Wallace relied on Micahel, he secretly knew he couldn’t stay there forever and chose a new life with his fiance Holly over his job in Scranton. If Michael gave business advice to those beneath him, it would be to work where they felt at home.

When Dwight bought the building that Dunder Mifflin was in he tried making it more accommodating for its workers. Knowing that Darryl wanted to join a gym, he created a version of one called Dwight Schrute’s Gym for Muscles and it was filled with farm equipment instead of proper weights and machines. Seeing Dwight’s dedication to Darryl as a building owner, who’s to say he wouldn’t have been a better boss than Michael?

This @DunderMifflim meme poked fun at how Michael, Jim, Kevin, and Dwight would look like if they all partook at Dwight’s gym. Dwight’s gym didn’t make its arrival until Michael departed the show but it’s very possible that he would have signed up since it was attached to the building.

Michael Was Not Responsible With His Finances

This meme by @TheOfficeHag couldn’t have been more perfect than if it were created by Michael Scott himself. Michael didn’t make a lot of money as the regional manager of the Scranton branch but he was comfortable.

It wasn’t until he started dating Jan that his finances plummeted. He started paying for the lifestyle of a woman who made far more than he did and it made his wallet dry. He filed for bankruptcy, thanks to advice from Creed and Oscar, and he broke up with Jan. Once those two things were done, Michael’s financial situation appeared better and he wasn’t so involved with various business schemes around the office.

This @GreatScottMemes meme was created with the face of a puppet used in an old video of Michael as a child. In the video, the puppet asked what Micahel’s dreams were for the future. After saying his goal was to have a bunch of kids so that he’d have a lot of friends, the puppet’s face was frozen in time.

The meme also poked fun at the time Meredith got drunk and flashed Michael in his office. It’s one of those Office scenes that were hard to watch twice because of how cringy it was. Like the puppet, Michael didn’t know how to react but later told her to cover up and he’d drive her home safely.

“I Am Ready To Get Hurt Again”

When Michael fell in love, it was all he could think about. Everything he did was for the other person and he often came off as too enthused. However, once the timeline between him and Jan came to an end after ‘Dinner Party,’ he knew he needed time to himself before dating again.

This all changed when he saw a photo of an attractive woman modeling in an office magazine at the office (just like the meme). Once he realized he was capable of finding someone attractive again, he didn’t remember the heartache he just endured or the promises he made to himself.

Use Straight, Left, Or Right When It Comes To Giving Michael Directions

This Michael Scott meme by @MichaelScott.TheOffice was relatable for fans of the show who also had a hard time calculating directions based on North, East, South, and West.

Since Oscar was one of the smarter characters on The Office, Michael’s mind was often in a pretzel after talking to him. Oscar tried dumbing things down for Michael—which did help when it came to finances and learning Spanish—but there were times when Michael’s frustrations would boil over and he’d respond in a sassy way like the meme.

Aside from Donna and the chair model, Michael’s taste in women was consistent: beautiful, nurturing, and blonde. The best part about the meme is that @TheOffice.Rules added a photo of Ryan and his blonde hair in the last cube.

Once Ryan went from working as a temp to working as the VP of Northeastern Sales, Michael’s fascination with Ryan grew. When Ryan’s time with corporate came to an end, he dyed his hair blonde and went back to being a temp. All the while, Michael’s “man crush” was more noticeable because everything Ryan did Michael tried copying.

One Of Michael’s More Relatable Moments

Even though Michael was obnoxious and outlandish, he was also incredibly relatable. Seeing him eat enough cheese balls to get cheese dusting stuck around his mouth proved how long he had been eating that snack.

@TheOfficeMemers used this still as a way to relate to how some viewers felt after a long day of work or running errands. Even with a long to-do list sometimes the best thing to do is eat a cheese ball and relax — and no one did it better than Michael Scott. How could viewers not root for him after seeing all that cheese dusting on his face?