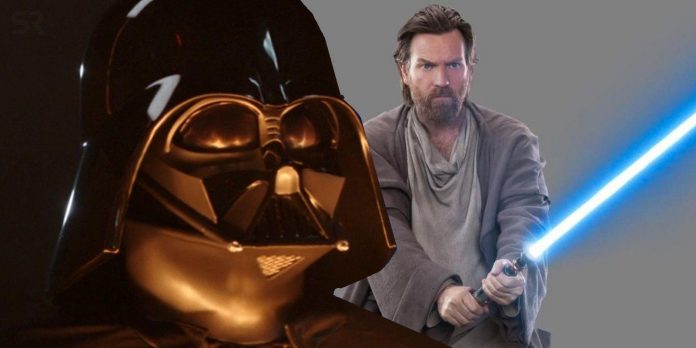 This article contains spoilers for the third episode of Obi-Wan Kenobi.

Obi-Wan Kenobi, episode 3, revealed that the titled Jedi master is easily defeated by Darth Vader, and his lightsaber form explains why. There was a time when Anakin Skywalker and Obi-Wan Kenobi considered themselves brothers. Obi-Wan even kept Anakin’s marriage to Padme Amidala a secret, contrary to the Jedi Code and his duties as a member of the Jedi Council. But that came to an end when Anakin knelt before Darth Sidious, and in Star Wars: Episode III — Revenge of the Sith, they fought a deadly duel. Obi-Wan won the first meeting, leaving Anakin to die in the lava fields of Mustafar.

But Anakin Skywalker didn’t die. Reborn as Darth Vader, he became the Emperor’s right hand and a real force to be reckoned with. Obi-Wan only found out that Anakin was still alive years later when he was forced to come out of hiding, as shown in Obi-Wan Kenobi’s Disney+ TV show. At the end of episode 3, Obi-Wan and Vader clashed again on the planet Mapuzo, and this time the result was completely different: Darth Vader broke through Obi-Wan’s defenses and humiliated him with a powerful strangulation Force. Obi-Wan has spent most of the last decade on the run, his lightsaber buried in the sands of Tatooine, so it’s no surprise that he lost.

In fact, however, Obi-Wan was at a disadvantage from the start simply because of his lightsaber shape. Obi-Wan was a Soresu master, sometimes referred to as a “Form of Resilience” because Master Soresu is able to maintain a strong defense while allowing his opponents to wear him down. But Darth Vader was ruthless in his attacks, fueled by anger and with mechanical limbs that increased his strength and ensured that he would not get tired. Darth Vader used his lightsaber as a hammer, not a blade, pinning Obi-Wan to the ground with the force of his blows. Worse, even the environment was working against Obi-Wan. Soresu is most effective in narrow controlled spaces where enemy attacks can be manipulated, but he allowed himself to be drawn into a duel with Darth Vader in the open air.

Soresu practitioners learn to experience a form of “double vision” bordering on foresight, allowing them to sense an approaching attack and defend against it—either harmlessly deflecting a blaster shot or blocking an enemy’s lightsaber. That’s why the Jedi of the Prequel era first taught Sores by teaching Junglings how to block blaster shots; it cultivated a sense of intimacy with the Force. Obi-Wan was one of Soresu’s greatest masters at his peak, but he let his relationship with the Force slip away during his self-imposed exile on Tatooine; this suggests that he constantly appeals to the Ghost of Master Qui-Gon’s Power, and does not trust the Power itself. As a result, during the duel with Darth Vader, the Jedi master struggled to predict his opponent’s attacks. At one point, he remained standing, brandishing a lightsaber, not knowing where Darth Vader was and in which direction he would strike.

The Sith Lord, of course, tilted the table against Obi-Wan. Darth Vader killed children while approaching Obi-Wan on Mapuzo, filling the Force with fear, which affects the Jedi’s ability to sense the Force. Palpatine used a similar strategy on a galactic scale many years ago, developing the Clone Wars to cut off the Jedi from the Force, and Darth Vader adopted it on a more local level. He was well aware that this tactic would be especially effective against Master Soresu, even if he didn’t know how weak Obi-Wan’s connection to the Force had already become. All this means that Obi-Wan lost the duel in the third episode of Obi-Wan Kenobi even before he activated his lightsaber.