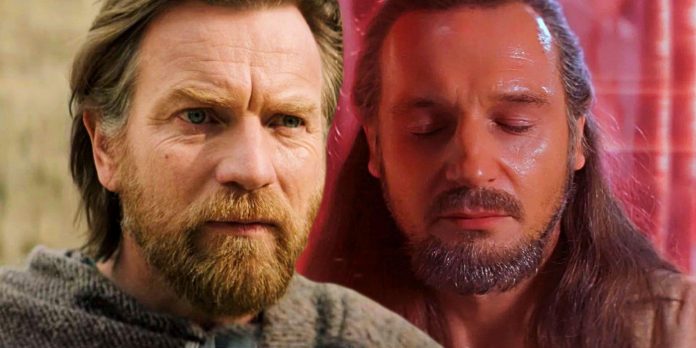 ATTENTION: spoilers for the first season of Obi-Wan Kenobi.

Obi-Wan Kenobi’s epic conclusion proved that one of Qui-Gon Jinn’s key teachings for Obi-Wan was correct. From the very beginning, Obi-Wan Kenobi Obi-Wan (Ewan McGregor) was a typical hero who resisted. As he made clear to his fellow Jedi on the run, Nari (Benny Safdie), “the battle is over, we’ve lost.” Hope seemed to have faded from Obi-Wan’s heart, and the only thing left was his duty to watch. over the young Luke Skywalker, while he tormented himself with the traumas of his tragic past.

By the time he faced Darth Vader (Hayden Christensen) in the series finale of Obi-Wan Kenobi, most of his former strength had been restored. Naturally, there were echoes of the previous duel between Obi-Wan and Darth Vader on Mustafar in Star Wars: Episode III — Revenge of the Sith. However, despite the fact that the battle was much more equal than in Obi-Wan Kenobi episode 3, Vader eventually prevailed and left Obi-Wan trapped and unable to move under a pile of rocks and earth.

Related: Obi-Wan vs Vader is Perfectly Connected with 1 Subtle Detail of “Return of the Jedi”

The manner of his subsequent escape can be seen as the fact that Obi-Wan finally learned the first lesson taught to him by Qui-Gon Jinn (Liam Neeson) in Star Wars: Episode I — The Hidden Menace. In the first moments of the film, Obi-Wan uttered a classic phrase from Star Wars: “I have a bad feeling about this.” When he explained to his Jedi master Qui-Gon Jinn that “it’s not about the Master’s mission. It’s something elusive, elusive,” the older Jedi advised him: “Focus here and now, where it should be.” Obi-Wan’s inability to focus on the moment was repeatedly manifested in Obi-Wan Kenobi through his obsession with the guilt and trauma of the past. Ultimately, it was by letting go of the past and focusing on the present that Obi-Wan was able to escape and defeat Darth Vader again.

The switch in his focus was certainly clear. Obi-Wan’s initial reaction to being buried by Vader was to focus once again on everything he had lost, and in particular on feeling guilty for not being able to stop his best friend Anakin Skywalker from becoming Darth Vader. This was not surprising, since this “bad feeling” was virtually everything he knew and felt before the events of Obi-Wan Kenobi. Ten years of pain after Darth Vader was burned and maimed on Mustafar was very difficult to overcome, but in this moment of obvious defeat, Obi-Wan’s thoughts turned away from the visions of the past. Instead, he found a way to focus on seeing the present and hoping for the future in the form of the Skywalker twins Luke and Leia. This, in turn, gave him the strength to free himself from everything that bound him, both figuratively and literally.

The potential significance of the role played by Qui-Gon Jinn’s teachings was confirmed by his appearance as a Force ghost in episode 6 of Obi-Wan Kenobi. Throughout the series, Obi-Wan tried to contact Qui-Gon with the Force, but it took until the last moments of the series for him to appear. When he did, Qui-Gon told him: “I’ve always been here, Obi-Wan. You just weren’t ready to see it.” The implication is that awareness of the present and the “living Force,” as Qui-Gon put it in Star Wars: Episode I: The Phantom Menace, allowed Obi-Wan to see his old master.

The irony of Obi-Wan’s “bad feeling” in “Star Wars: Episode I: The Hidden Menace” was that it turned out to be an effective and accurate foreshadowing of the events of this movie “Star Wars: Episode II — Attack of the Clones”. and “Star Wars: Episode III — Revenge of the Sith”. However, Jedi Master Qui-Gon Jinn and his wise words had even more significance in terms of how Obi-Wan could be understood. Moreover, using such a subtle callback in Obi-Wan Kenobi showed how Qui-Gon’s simple lesson was powerful enough to help Obi-Wan free himself from guilt and trauma.