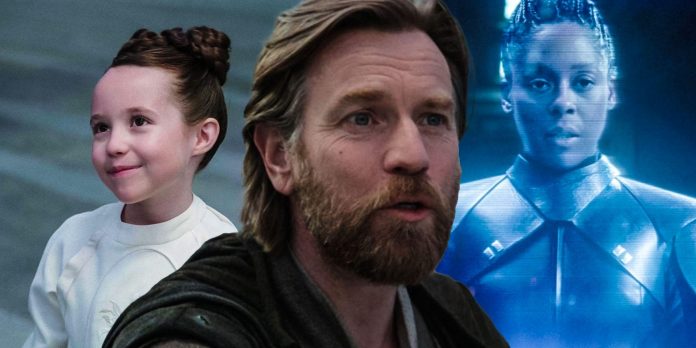 Warning! SPOILERS ahead for Obi-Wan Kenobi.

Obi-Wan Kenobi doesn’t have a confirmed season 2 and none of its characters are set for spinoffs, but how it ends does create the potential for several other Star Wars TV shows that are not yet announced. Wrapping up with episode 6, Obi-Wan Kenobi brings to a close the story this season was always about: Leia is rescued, Darth Vader is defeated (for now), and any immediate threat to Luke on Tatooine has been removed. However, the point at which it leaves off with Obi-Wan and its other characters does leave the door open for seeing more stories with them in this time period.

Currently, there are nine more Star Wars shows releasing after Obi-Wan Kenobi. This includes Andor and Star Wars: The Bad Batch season 2, both of which are set between Star Wars: Episode III – Revenge of the Sith and Star Wars: A New Hope, similar to Obi-Wan Kenobi. Beyond these shows, there are a few movies also in development, but Disney and Lucasfilm are focusing almost exclusively on more Star Wars stories for Disney+. As such, while continuing Obi-Wan Kenobi isn’t presently part of the plan, there’s still a potential for that to change were there interest.

The Obi-Wan Kenobi season 1 ending does work very well as a conclusion for the story, and brings new perspective to a few moments from across the Skywalker Saga. This said, the show’s finale also offers some intriguing setup for where the story could go next for Obi-Wan as well as other characters either introduced or featured in the series. And if expanding on this was something Disney and Lucasfilm were interested in developing, there are at least four different shows that have been set up by Obi-Wan Kenobi.

The final episode of Obi-Wan Kenobi season 1 finds Leia safely back home on Alderaan and ready to resume her duties as the planet’s princess. Her time off-world has opened her eyes to what’s really going on in the galaxy, and she’s determined to help make things right. However, Leia is also determined to do things her own way and says that to her father, Bail Organa, insisting on some changes if she’s to take on a larger role within the royal family. This is most clearly illustrated in her attire for the final scene where she pairs her princess garb with a pair of boots, the gloves Obi-Wan bought for her, and Leia’s new holster. Already, Leia is presenting herself not just as a dignitary, but as a leader who isn’t afraid to take charge no matter the situation.

Leaving off with Leia as she finally accepts the path that will find her to becoming a senator and rebel leader is a tantalizing tease of what it would be like to watch her grow into that woman. A young Leia series could explore this further and see her learning diplomacy and strategy from her father. It could also show Leia taking part in her first missions for the rebellion, similar to her brief appearance in Star Wars Rebels where she acts as her father’s official representative while also secretly aiding the Lothal rebels. Not to mention, Vivien Lyra Blair has been so universally praised for her portrayal of Leia it would make sense for young Leia to appear after Obi-Wan Kenobi season 1.

Having been stabbed through and left for dead in Obi-Wan Kenobi season 1’s penultimate episode, Reva still manages to carry on through the final episode. In fact, she’s still alive at the end of the series. She’s left in an interesting position, too, seeing as she resists the temptation to be fully consumed by the dark side, choosing to spare and even rescue Luke. Clearly, she can no longer be an Inquisitor, and as a Force-user and traitor to the Empire, she’ll need to keep a very low profile in order to survive. But as Obi-Wan says to her, “Who you become now, that is up to you,” leaving her story very open-ended.

Free from her quest for revenge, though, it’s likely she will find a new purpose and a Reva spinoff show could explore that. Perhaps, she would join those working the Jedi Path and help other Force-sensitives and former Jedi escape the Empire. It wouldn’t be easy convincing others to trust her, but this could be a way for Reva to begin atoning for the terrible things she’s done, because while she’s finally turned back to the light, that doesn’t immediately absolve her of past deeds. Along with The Path, Reva could find herself aiding the fledgling rebellion. While not really a Jedi, she is a trained Force-user and a potentially powerful ally against the Empire – especially the remaining Inquisitors, against whom Reva would be helpful in combat and as a source of information.

Darth Vader returning in Obi-Wan Kenobi season 1 works very well to further flesh out the iconic villain, adding even more layers to a character who has already received an entire trilogy of backstory. The series ends with an Emperor Palpatine cameo that sees the Sith apprentice reaffirming his commitment to his master and swear off his obsession with his former Jedi teacher. No longer weakened by his “feelings” for Obi-Wan, as the Emperor puts it, Vader is primed to enter the height of his power. The forthcoming years will see the Empire tighten its grip on the galaxy, and the one leading that charge is, of course, Darth Vader.

The more recent depictions of Vader in both Rogue One and now Obi-Wan Kenobi have emphasized his incredible power and the fear it can instill. Seeing more of that in a Darth Vader show would be thrilling, but even more intriguing would be a deeper insight into his ultimate plans now that he’s no longer fixated on Obi-Wan. It’s no secret Vader has an interest in overthrowing Palpatine and ruling the galaxy himself. He proposes that idea to Padme in Revenge of the Sith and later again to Luke in Return of the Jedi. Not to mention, killing one’s master is the Sith way. So while Obi-Wan Kenobi leaves off with Vader again swearing allegiance, it’s likely there’s already some plan in motion to unseat the Emperor. Another series focusing on Darth Vader could begin to explore those plans and why they ultimately fail, helping to pave the way for Vader’s eventual plan for Luke to join him in overthrowing the Emperor.

More than any other new Star Wars show, the Obi-Wan Kenobi finale ends in a way that leaves a path forward for an Obi-Wan Kenobi season 2. While not necessarily a cliffhanger ending, the tease created by Obi-Wan finally seeing Qui-Gon’s Force Ghost is a fascinating one. The secrets of the Force have been explored in Star Wars media before, most notably in Star Wars: The Clone Wars, but getting to see Qui-Gon teach Obi-Wan how to live on after death would be an interesting new piece of lore. Additionally, Obi-Wan officially meeting Luke is an important moment, but it’s likely not enough to explain the familiarity that exists between the two come A New Hope. In order to better develop that relationship, Obi-Wan and Luke probably need to interact a few more times over the years, and an Obi-Wan Kenobi season 2 could feature more of those moments.

The ideas mentioned for Leia, Reva, and Vader could also be factored into an Obi-Wan Kenobi season 2. After all, Obi-Wan is an important character in each of their stories, and there’s little to keep them from crossing paths with him at least one more time before A New Hope. As it stands, Obi-Wan Kenobi’s season 1 finale does work well as an end to the story it set out to tell with its first episode. But where it leaves off with its characters are interesting points in their stories that would be worth exploring, either in more Disney+ Star Wars shows or a proper Obi-Wan Kenobi season 2.

Steam Made Company of Heroes 2 and its DLC Free, Total...