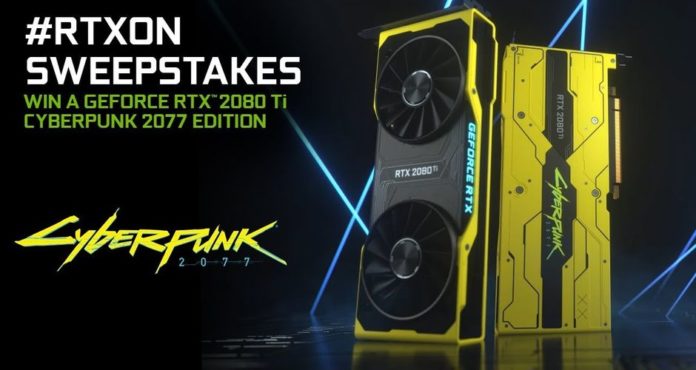 In a news article we shared yesterday, we mentioned that the US technology giant Nvidia cooperated with the Cyberpunk 2077 team and would produce a limited number of specially designed graphics cards. Nvidia, who made explanations about this collaboration announced on Twitter, excited the gamers by saying “Do not leave …”.

The announcements made it clear that Nvidia would produce a Cyberpunk 2077-themed graphics card. But now, it turns out that both the design of this video card and which model of the company it belongs to. The hand-held Nvidia team announced special version graphics cards with the statements made on Twitter. These special graphics cards, produced only 77, are based on the GeForce RTX 2080 Ti model.

Nvidia’s Cyberpunk 2077 themed graphics cards
The new GeForce RTX 2080 Tis announced by Nvidia are identical to the basic model in terms of performance. We can clearly state that this display card, which is produced in 77 pieces, is only special in appearance. Nvidia team, influenced by the yellow color of Cyberpunk 2077, has concentrated on this color and put a graphics card that looks very stylish. The most impressive part of this special version is undoubtedly that if you want to have it, you will not pay any price.

Nvidia’s Cyberpunk 2077-themed GeForce RTX 2080 Ti graphics cards will be distributed for free
Nvidia is known as the most powerful in the market and only 77 produced, this special version will give GeForce RTX 2080 Ti free to gamers. Moreover, anyone using Twitter can participate in this campaign. except in some countries, including Turkey …

In order to have this special version video card of Nvidia, it is first necessary to retweet the tweet located just above. However, while doing this, it is also necessary to write a few words and tag a friend and use the “#RTXOn” tag. Unfortunately, no country within the scope of Turkey’s lottery.

Note: If you are selected within the scope of the campaign, both you and the person you tag win one video card.

We made 77 for our community.

Want one? Here's how:
1. RT this video.
2. Tag a gamer who is as excited as you about Cyberpunk 2077 in the replies with #RTXOn
3. If selected, you BOTH win these limited edition GPUs! pic.twitter.com/IG2BZZCZ6H

Why did SpaceX send ice cream and avocados into space?