Home Tech The Nubia RedMagic 5G is available in red until June 8! 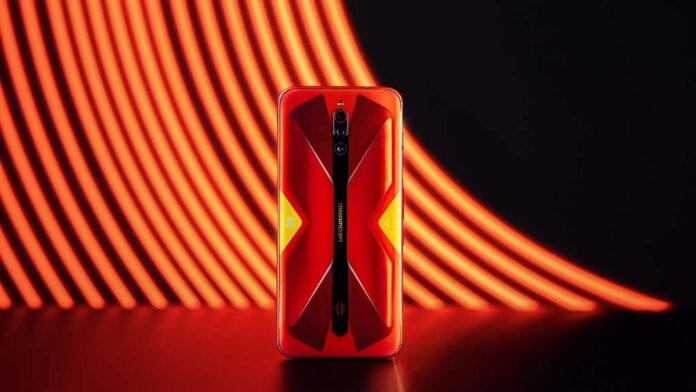 Among the rare mobiles dedicated to gamers, here is the Nubia RedMagic 5G. Launched in France last May, this supercharged smartphone has a high refresh rate and an efficient cooling system. At the moment and until June 8, the smartphone is available in a red version, and if you pre-order it, 1% of the costs will be donated to the Child’s Play association. Go to the end of the article for more details.

In the very limited circle of smartphone manufacturers for gamers, here is Nubia with its RedMagic 5G. Futura had already mentioned the supercharged models like the Asus ROG Phone 2, the Razer Phone 2, or the Xiaomi Black Shark 2 and its Pro version.

Unlike these sleek models, often with a light signature reminiscent of the gaming atmosphere, the Nubia RedMagic 5G is much less aggressive visually. Apart from its logos which can light up, the mobile is much more discreet and versatile.

Despite its contained price (€ 579 for the 8GB + 128GB Eclipse Black model and € 649 for the 12GB + 256GB Pulse model), the Nubia RedMagic 5G is armed to rub shoulders with its direct competitors. It has the distinction of being the only mobile with a 6.6-inch screen delivering an unprecedented display refresh of 144 Hz, while its competitors peak at 120 Hz. A frequency that will reveal its relevance in the most popular games. more muscular.

Under this screen, a Snapdragon 865 processor supported by 8 or 12 GB of RAM is available. The Internet storage of the Nubia RedMagic 5G starts at 128 GB and a maximum of 256 GB. With its almost all-purpose appearance, it is not because the smartphone is dedicated to games that it is not intended for all audiences. Besides, its photo part has not been ignored, as is often the case on models for gamers. On its back, the device has three modules. The main one has a 64 megapixel sensor. An 8-megapixel wide-angle lens is also available, as well as a third 2-megapixel sensor dedicated to depth of field. On the front, there is an 8 megapixel selfie sensor.

Small novelty of the moment, the version “Hot Rod Red” of the Nubia RedMagic 5 is in presale on this site. The brand also announced that 1% of the purchase price will be donated to a Child’s Play association, a charity that donates toys and games for children in hospitals around the world.

To return to the description of the smartphone, the set is accompanied by a 5G modem, as the name of the mobile suggests. Like all mobile phones for gamers, the cooling system has been treated. In the case of the Nubia RedMagic 5G, in addition to a liquid cooler, Nubia has relied on a variable speed fan. It works during games to reduce to zero the overheating that we know on mobiles not dedicated to games.

To cool the Nubia RedMagic 5G as much as possible, the fan can be run at 15,000 rpm. To launch the game mode and the settings, whether it is the display, user profiles or sound, the mobile has an easy-to-access red selector placed on the side. Finally, the Nubia RedMagic 5G is also equipped with mini-triggers (customizable for each game) placed so as to fall under the fingers on the sides of the mobile.

As a reminder, here are the prices for two other versions of the Nubia RedMagic 5G: