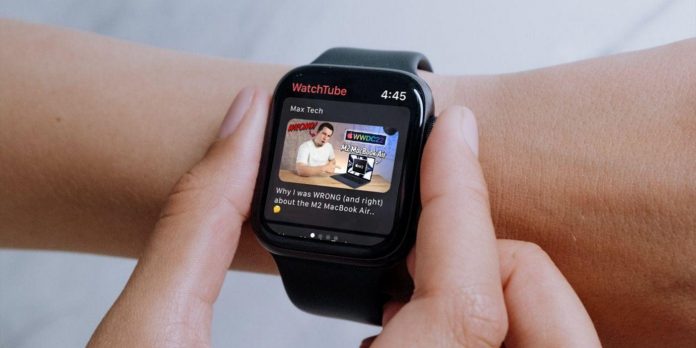 The new app, available in the App Store, allows users to watch YouTube videos from their Apple Watch. Apple’s smartwatch has several features, including the ability to make phone calls, stream music, send text messages and more. It also has an ECG function, blood oxygen monitoring, irregular heart rate detection and a fall detection function, which is believed to have saved many lives. However, the only thing he hasn’t been able to do so far is stream videos from YouTube, since Google doesn’t offer an official YouTube app for the Apple Watch.

The official YouTube app is available for many platforms, including iPhone and iPad. The large screens of phones and tablets make watching videos more enjoyable than watching on the tiny screen of a smart watch. However, many users still want to be able to view their favorite video blog or watch an episode of their favorite show on Apple Watch without taking out their phone or tablet. A new third-party app will help users with this in the absence of an official Google app.

By topic: How the Apple Watch Virtual Trainer Will Help You Run Better

A new third-party app called “WatchTube” allows users to watch YouTube videos on Apple Watch and is available in the App Store. It is compatible with Apple Watch running watchOS 6 or later and with iPhone running iOS 13 or later. The free app from developer Hugo Mason allows users not only to play videos on YouTube, but also to access a wide range of YouTube features. These include likes of videos, subscribing to channels, using hidden subtitles, searching and viewing suggested videos and stories.

As for how the app works, the official listing page in the App Store says that when you first open the app, it shows a list of popular YouTube videos. As soon as users start watching the video and click the “Like” and “Subscribe” buttons, the feed will learn based on the user’s choice and adjust its algorithm to show the most relevant content. However, all data will remain on the watch for privacy reasons. According to the developer, “all curated and generated content displayed in your feed is created offline on your watch.”

Speaking about the app in a Reddit post, the developer also said that they are working on a sound-only mode that will help users extend the battery life of their watches. They also noted that the app has been under development for seven months, and stated that it is the perfect solution for capturing YouTube videos on the fly. However, the app is still working on adding a login feature, which means that users still don’t have access to their original YouTube history and can’t comment on videos. The developer, however, says they will try to figure out if it is possible to add this feature in the future.

Amid the high-profile revelations in the trial of Then Chris Lee...