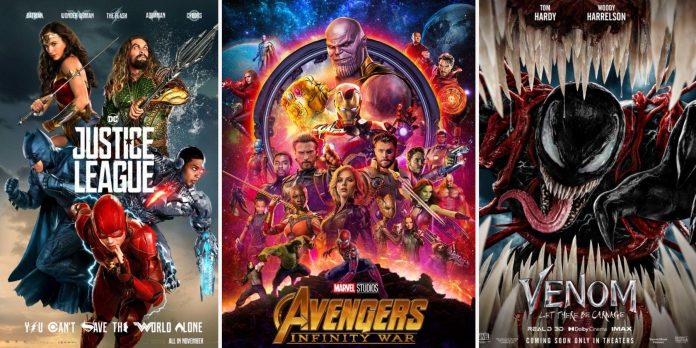 If there’s one thing the MCU proved over the last decade, it is that having an interconnected movie saga is where it’s at. Marvel Studios’ appeal managed to turn even the unlikeliest of heroes into a massively profitable venture. Nevertheless, the old adage of “great artists copy, great artists steal” really doesn’t bode well for either Warner Bros. or Sony, something their executives might be taking notice of.

In the DCEU’s case, the issue is a bit more problematic when it comes to plans for the MCU-inspired movie saga, because blueprint was laid out nearly a decade ago when Man of Steel premiered. But in Sony’s case, it would have been wiser for the studio to take note of the current superhero movie landscape. So, at a time when even the almighty Marvel seems to be struggling to find its footing in Phase Four, both the DCEU and Sony’s Spider-Man Universe make one wonder if the MCU can actually be replicated in the first place.

The Grass Is Always Greener On Marvel’s Side

With at least 10 films and 6 new series planned over the course of the next five years, questioning the success or viability of Marvel Studios seems rather ludicrous. However, the numbers don’t lie. Since the start of Phase Four, the MCU has not hit the same figures it had back when Cap and Iron Man were around. Now, six movies into what is supposed to be a new beginning for the franchise, results are mixed at best. Reactons range from the relative busts like Black Widow and Eternals, to more middle-of-the-road performers like Shang-Chi, to the proven classics like Doctor Strange and Thor.

The problem is even Doctor Strange in the Multiverse of Madness and Love and Thunder seem destined to fall short of hitting that coveted billion-dollar milestone. None of its direct predecessors achieved this, but it’s a feat that looks increasingly unlikely in the near future, despite rising inflation worldwide. The themes in the MCU’s Phase Four have become increasingly diverse from practically every point of view, but by having so many current storylines without a clear route like the Infinity Saga did, it’s hard to imagine those record-shattering numbers showing up again until the next Avengers team-up film happens.

Even then, as budgets for all these CGI-packed superhero blockbusters continue to rise, the same goes for studio expectations and targets. There’s a lot of pressure for movies to turn out as profitable as they used to be. The fact that China has taken an anti-Marvel stance in Phase Four doesn’t help, as the country’s massive population was always something that studios could rely on to squeeze that final $200m that usually covered any movie’s production budget.

Disney Plus’ Marvel shows are an entirely new breed. The platform currently acts as a playground where the studio can introduce new characters with extra depth. They don’t have to convince moviegoers the same way movies do because, well, users are already paying for all the content. All things considered, although the MCU might not hit the same heights without a Secret Wars-style film in the near future, its established fan base allows it more room for experimentation.

Building A Cinematic Universe From Scratch

The problems that Warner Bros. and Sony face are drastically different. The former still has to deal with the fallout from its failed attempt at a DCEU, whereas Sony finds itself with a series of critically panned movies that could never live up to the lofty standard of the friendly neighborhood Spider-Man. The Warner Bros. Discovery conglomerate has at least established HBO Max as a platform that it can leverage to help kickstart many new IPs, such as the successful Peacemaker or the promising Batgirl. Nevertheless, it’s arguable whether a large-scale interconnected universe plays to the DC’s strength the same way it does for Marvel. For example, films like Joker and The Batman prove that isolation fosters creativity in a far better way than having to set up future films or other superheroes, thus why The Batman’s spinoffs aren’t necessarily a great idea.

As if that wasn’t enough, the ongoing DCEU initiative has all but lost its course after The Flash’s leading actor, Ezra Miller, has been caught up in so much legal trouble that they are no longer a viable option to lead the lines for DC. Sure, DC’s upcoming films look promising with Dwayne Johnson bringing his box office powers to Black Adam and Shazam!, but regardless of that, their commitment to the DCEU hinders their individual potential, especially with Zack Snyder out of the picture.

Sony’s prospects are much brighter. Spider-Man is more than enough to lure people into watching anything. But in spite of that, the likes of Venom and Morbius still lack a proper Spidey of their own and both seem to be relying too much on their faint MCU connection, as evidenced by Adrian Toomes’ non-sensical multiverse jump. Simply put, there can’t be a Sony’s Spider-Man Universe if the only Peter Parker variant hangs out in the MCU.

Overall, both DC and Sony have found more success when their most iconic heroes live off their own adventures, instead of wasting precious screen time dedicated to other stories or compromising their own artistic vision for the sake of connectivity. So, at least until Sony reveals a new Spider-Man, Sony’s cinematic universe doesn’t have much over its DC counterpart.

Review of the 8th episode of the 6th season of the...