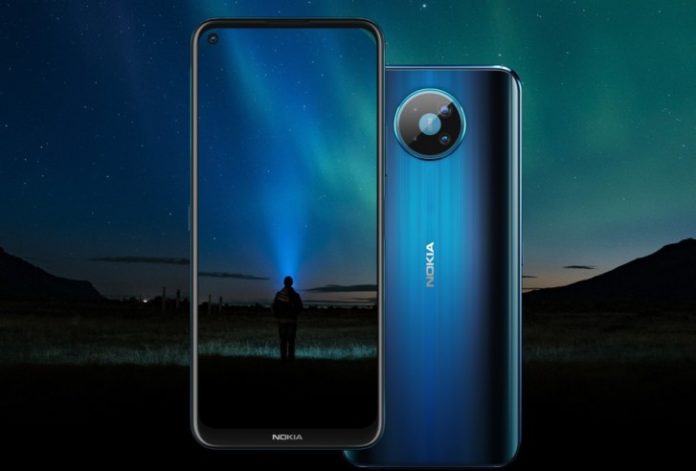 The long-awaited Nokia 8.3 5G was finally introduced. The Snapdragon 756G has received a lot of appreciation for the device, which has a quad rear camera and more 5G bands than other rival smartphones. After a long period of silence, Nokia, with its new device, has signaled that it will be the leader among the upper mid-range smartphones for 2020.

The new device, which is considered to be the successor of the Nokia 8.1 model in terms of the technical features it carries and comes with features that are not available on any smartphone, attracted attention with its design. The new smartphone, which seems to have a thin frame on the edges of the screen, also carries the brand logo on this frame. The front camera of the device, which has recently featured perforated screen design, is also located in this hole.

Covered with curved glass on the back, the Nokia 8.3 5G accommodates four cameras on this glass. The design, consisting of 64-megapixel, 12-megapixel ultra-wide angle, 2-megapixel depth, and 2-megapixel macro cameras, carries the signature of ZEISS. Note that the front camera of the device also has a resolution of 24 megapixels.

Fingerprint reader located on the side
The phone that carries the fingerprint sensor on the side, which is also used as a power button, comes with a 6.81 inch PureDisplay Full HD + HDR screen. It should be noted that the device also gets its power from the Snapdragon 765G processor and 6 to 8 GB of RAM. The memory of the phone, which has two different storage areas ranging from 64 GB and 128 GB, can be increased up to 400 GB with microSD.

The phone has a 4,500 mAh battery that offers 18 W fast charging support. It also includes an audio jack, FM Radio, Bluetooth 5.0 and Dual Band Wi-Fi. The Nokia 8.3 5G comes out of the box with Android 10 and is said to receive 2-year Android updates and 3-year security updates.

Price announced as 599 euros
One of the sales privileges of the Nokia 8.3 5G stands out as more 5G band support than any other phone in the world. In this respect, the device stands out not only for 600 MHz bands, but also for mid bands and 3.8 GHz high bands.

Let’s add that the phone will be available this summer with a price tag of 599 euros. HMD Global has not yet stated whether this price has a price tag of 6 GB RAM or 8 GB RAM version. We believe that detailed information about the phone, produced with a surprisingly single color called ‘Polar Night’, will continue to be announced in the coming days.