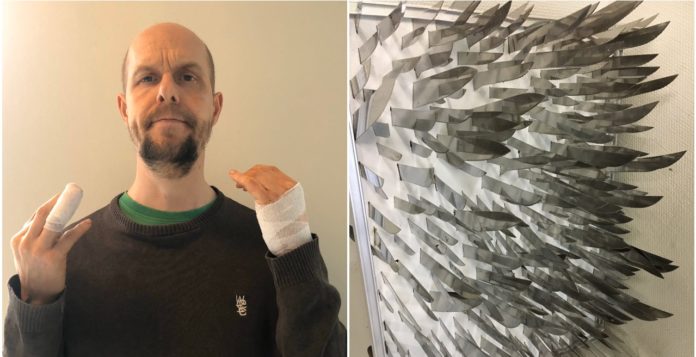 People who are trapped in their homes because of the coronavirus outbreak are surprised at what to do with boredom. Norwegian performance artist Jan Hakon Erichsen is one of them. Erichsen, known for his videos of popping balloons with homemade mechanisms that he equipped with knives, was less than happy.

Norwegian performance artist Jan Hakon Erichsen, who burst balloons with various homemade mechanisms he equipped with knives, went viral on social media with his videos of these moments. Erichsen, who further increased his audience with the new videos he shared, was one of those shows.

“I was producing content for a series of videos that I tried to balance in different ways on different furniture, but I was planning to do it on Instagram Live. Now I am giving up this idea,” Norwegian performance artist told BuzzFeed News. used expressions.

Falling on a table with dozens of knives, Erichsen said what he did was “really stupid”. The Norwegian man who tried to recover himself after he fell, stated that all sides were blood because of the cuts in their hands.

Expressing that he was calling the ambulance immediately, Erichsen stated that more than 25 stitches were applied to various parts of his body, especially his arms and fingers. “I really feel lonely because I can’t go to my studio anymore,” said the Norwegian artist, who now spends time at home with his family. Whether Erichsen will shoot similar videos after recovery is unclear for now.

Jan Hakon Erichsen, video with a knife popping a balloon