Home Entertainment Nope Alien explained: what is an alien and; What does it want? 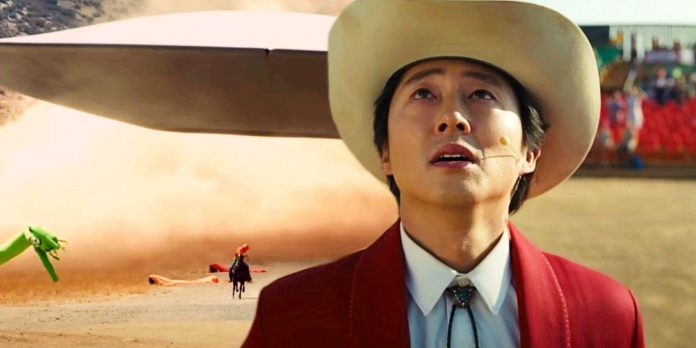 Jordan Peele’s Nope offers a new and insightful addition to the sci-fi horror genre, especially in regards to its mysterious alien ufo monster, and the amibigous origins and its motivations the creature has. Nope (2022) is the third directorial venture in Jordan Peele’s horror movie roster, following the critically acclaimed horror-thriller movies Get Out and Us. Peele’s films are often notable for their underlying social commentaries, with Nope seeing the director break out from his typical horror approach as he comments on the widespread obsession with spectacles, which certainly applies to the unique nature of Nope’s alien.

Nope follows siblings OJ (Daniel Kaluuya) and Emerald Haywood (Keke Palmer), the claimed descendants of the man in the famous The Horse in Motion pictures. The two must run their family’s Haywood Ranch after their father suddenly dies from a nickel that mysteriously falls from the sky, while also coming into frequent contact with the nearby Jupiter’s Claim theme park when forced to sell one of their horses. After a series of odd occurrences, Nope’s main characters OJ and Emerald suspect a UFO is hovering over their ranch, with their surveillance camera installer, Angel (Brandon Perea), helping them detect the object. Eventually, it’s deduced that the UFO isn’t a spacecraft, but rather the alien itself, which the characters in Jordan Peele’s movie nickname “Jean Jacket.”

After the alien eats and kills many of those around the Haywood Ranch and the audience at Jupiter’s Claim, OJ and Emerald successfully destroy the being. Nope’s ending leaves certain loose ends untied, such as whether there are more of the aliens nearby or if Emerald and OJ made enough money to save their ranch from the photos. However, the most curious yet marvelous aspect of the story that stays with audiences after the climactic Nope movie ending is the alien itself, including questions about the species’ physical appearance, its motivations for food and territory, why it ate humans and horses, and the reason it stayed so close to Haywood Ranch.

What Are The Aliens In Nope?

While the creature is nicknamed “Jean Jacket,” Nope never explains exactly what the alien is or the nature of its origins. The alien at first takes on the form of a saucer reminiscent of stereotypical UFOs, only for it to shift into its true form of a more parachute-like, flowing being evoking the imagery of biblical angels. It’s typically seen as dark gray at night, but has a lighter appearance when attacking OJ and Emerald during the day. The alien in the 2022 horror movie also has an impressive camouflaging ability, as it remains in the sky disguised behind a cloud that never moves. When feeding, the alien in Nope opens its “mouth” and sucks up horses, people, and any object in its path through a large area that reflects the design of very early cameras. The alien also has a great impact on electricity and technology when nearby, making them inoperable when in the alien’s path.

Nope’s alien was killed by Emerald when she untied the giant helium balloon mascot from Jupiter’s Claim, which exploded inside of the alien’s mouth and ripped it apart. Since Nope ends soon thereafter, it’s unclear whether there were more aliens around and, if so, whether they exhibited the same physical and temperamental traits as Jean Jacket. It’s difficult to judge the entire species based on one example, but it’s likely the Jordan Peele’s movie also leaves certain details of the creature ambiguous intentionally, as introducing more than one of these alien creature in the film would have allowed audiences to potentially extrapolate more details about them, sabotaging some of the mystery.

What Does The Alien Want In Nope?

The main characters in Nope suggest that Jean Jacket is extremely territorial, which is part of why the alien has become so intent on feeding on those in the area near Jupiter’s Claim and Haywood Ranch. While its primary motivation is likely to establish dominance over the area, it also has the primal need to eat, which is why it moves from Jupiter’s Claim over to Haywood Ranch to feed on the horses. Daniel Kaluuya’s Nope character describes the alien as a “bad miracle,” but doesn’t seem to believe that it had any other purpose on Earth than to eat and claim its own territory.

Related: Does Nope Have An After Credits Scene?

The alien in Nope doesn’t necessarily seem to have a sinister motivation for preying on humanity like the villains in various other sci-fi films, as it appears to just be an unidentified predatory entity that settles on Earth in order to feed. While its original motivations for landing on Earth aren’t explained, Nope’s alien seemed to have become angrier and more predatory after Ricky “Jupe” Park (Steven Yeun) tried to tame it, which connects to Nope’s scenes with Gordy the Chimp, who went on a murderous rampage on the set of a 1990s sitcom. As OJ and Emerald’s father had said, some things aren’t meant to be tamed, so the alien may have lashed back at Jupe and humanity’s attempt to control it.

The Feeding Habits Of The Alien In Nope Explained

The alien in Nope is frequently seen eating horses and humans, and perhaps any organic matter that is found near Jupiter’s Claim and Haywood Ranch. Nope makes it clear that the alien cannot digest anything inorganic, which is why it spits out metals, fake horses, and coins, such as the nickel that killed OJ and Emerald’s father. Connecting to the movie’s core theme of spectacles, Nope’s mysterious alien doesn’t feed on those who don’t look directly at it. Society has an obsession with needing to see and understand every moment, especially those that are particularly bizarre, but only those that can manage to ignore the spectacle are the ones that survive in Nope.

Why Does Nope’s Alien Stay Near The Haywood Ranch?

Nope’s alien would have found far more food closer to the heart of Los Angeles, but chose to stay in the remote area near Jupiter’s Claim and Haywood Ranch. The reason for this seems to be that Jupe had been regularly feeding the alien for months in an attempt to tame it as a spectacle for his theme park show, “Star Lasso Experience,” with the horses at the nearby Haywood Ranch in offering plenty of food. Since the alien in the Nope movie had already eaten Jupe, his family, and all of the audience members at the theme park before the film’s ending, it had to move over to Haywood Ranch where it knew there would still be food. Had the Nope movie protagonists been unsuccessful in killing it, the alien likely would have moved into more populous areas to feed on other humans and wildlife.

Porygon2 Phanpy Fusion is Too Cute