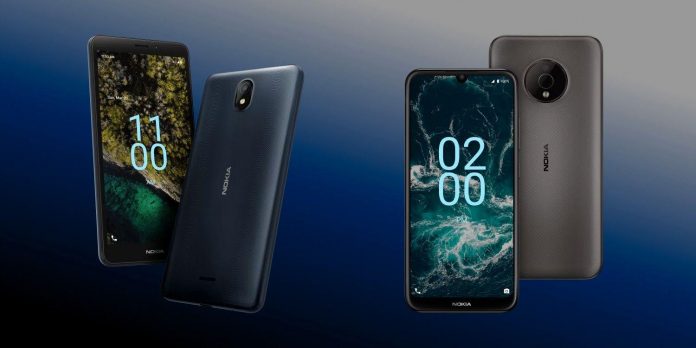 The Nokia C100 and Nokia C200 are now available for purchase in the United States a few months after they were announced at CES 2022. HMD Global has not released a flagship phone for three years and intends to continue in the same spirit. In a statement released in March, the head of the company’s marketing department said that in the foreseeable future, the brand will continue to focus on entry- and mid-level smartphones.

This strategy paid off as HMD Global recorded significant growth as it focused on budget smartphones and feature phones. The Finnish company has also eliminated complex launch events from its business, leaving only pre-recorded videos, blog posts and social media announcements about new products.

Those who want a small phone will prefer the Nokia C100, as it has a compact 5.45-inch screen. The 18:9 display has HD+ resolution and is protected by tempered glass. Above the display is a 5-megapixel camera next to a small slot for a conversational speaker. On the other hand, the Nokia C200 has a larger 6.08-inch HD+ display with a U-neck for an 8-megapixel camera. It also has 2.5D tempered glass for protection. Both phones are equipped with the MediaTek Helio A22 chipset in combination with 3 GB of RAM and 32 GB of internal memory. There is also a microSD card slot for adding up to 256 GB of additional storage.

The Nokia C100 has an 8-megapixel sensor on the back, while the C200 has a sharper 13—megapixel sensor. There is no fingerprint scanner in any phone, but there is face unlock. They also have an audio jack, Bluetooth 5.0, one SIM card slot and a USB-C port. There is no mention of battery capacity, but their product pages claim that the Nokia C100 will provide “all—day battery life” and the Nokia C200 will provide “2 days of battery life”. Unfortunately, the Nokia C100 only supports 5W charging, while the Nokia C200 supports 10W standard charging. The good news is that both phones come with a charger.

HMD Global ships both phones with Android 12, unlike the OnePlus Nord N20 5G, which ships with Android 11. There is no mention of how many OS updates they will get, but at a minimum they should get the Android 13 update. Two phones are already available for purchase exclusively through Walmart. Those who agree to the Nokia C100 will have to pay $39.88 with a choice of Tracfone, Simple Mobile, Straight Talk and Total Wireless. On the other hand, the Nokia C200 costs $69 and is only available on Straight Talk.

Gray Anatomy: Sure of DeLuca’s end!