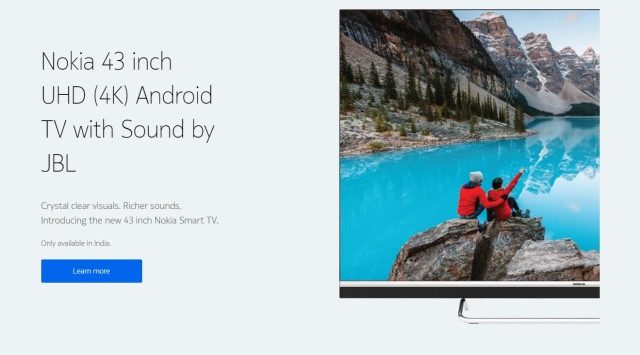 Nokia, which is trying to return to its old days in the mobile sector, continues its search in other sectors. In this context, the Finland-based company, which is trying to take its place in the smart television industry, recently agreed with Flipkart and introduced its 55-inch TV.

The company, which has entered the smart television industry from the best to the new, introduced its new 43 inch (109 cm) television quietly recently. The TV named “Nokia Smart TV 43” offers similar features to the 55-inch model. At this point, the most striking feature of the new television is that it is equipped with the JBL sound system.

What does Nokia Smart TV offer?
Smart television, which offers very thin bezels on the side and top, has a thicker frame on the bottom, due to the use of JBL supported speakers. At this point, Nokia seems to have made the right decision by cooperating with JBL, a brand that has proven its success in the audio system.

When we come to the supported features section, this 43-inch television has support for Google Assistant and Chromecast just like the big model. In addition, it should be noted that the TV supports Dolby Audio and DTS Surround Sound and supports 4K resolution.

Nokia has made no explanation for the price of this smart television, or when it will be released, that was introduced recently. At this point, the company’s partnership with Flipkart may lead to the TV being sold privately for the Indian market. So what do you think about Nokia’s new 43-inch smart TV? You can share your ideas with us in the comments section.

A GTA Fan Created GTA 6 Map with All Classic Cities