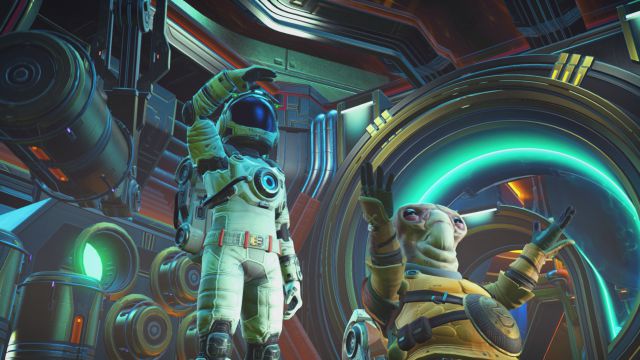 No Man’s Sky: The Sentinel Update is available on PS4, PS5, Xbox One, Xbox Series X, Xbox Series S, and PC; the game will also be released on Switch. Sentinel is the title of the new free update of No Man’s Sky, available in all versions in which the game is available. One of the main novelties is that the battle system is improved with some additional features. From now on it will be possible to fight with a robotic partner. In addition, the weapon system is completely renewed, new stories are added and the Sentinel enemies, which give the expansion its name, have their own combat patterns.

The Sentinels now have a new jetpack, which allows them to move around the battlefield in a “terrifying” way, they confirm on the official website. Now when players encounter them they will use new gadgets like energy shields or special grenades. In addition, they will be able to call robots like the aforementioned Hardframe, protected by a hard shell.

On the other hand, weapon effects have been completely redesigned. Hello Games has implemented the option to activate AMD Fidelity FX Super Resolution, which allows the product to be optimized so that the image quality remains “impressive” without sacrificing fast refresh rates. “All PC gamers can benefit from this new technology, which allows for increased performance regardless” of the graphics card they have.

No Man’s Sky was released in 2016 first on PS4 and PC. Complaints during the launch focused on comments about broken promises. However, since then, the studio has been immersed in the development of free updates and expansions, which have brought the product closer to what was initially promised. Hello Games’ work is also available on PS5, Xbox One, Xbox Series X and Xbox Series S. Coming soon, in the summer, it will also be released on Nintendo Switch.