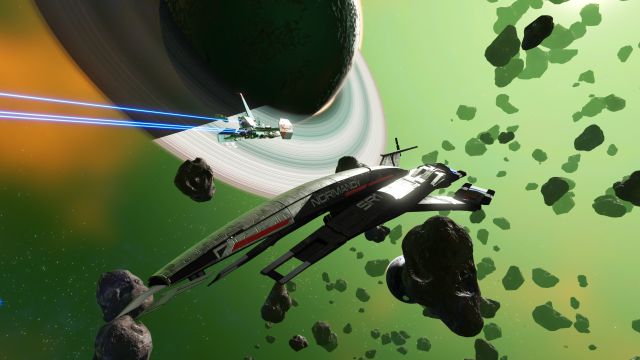 No Man’s Sky: The Hello Games production celebrates the premiere of the remastered version of the Mass Effect trilogy with this tribute. Hello Games and BioWare have joined forces for a crossover between No Man’s Sky and Mass Effect. In recent days, the Beachhead Expedition event has kicked off in the space exploration video game. As users have completed it, they have discovered that reaching the end has an unexpected reward: the Normandy SR1 ship in which Shepard travels and the rest of the crew is in No Man’s Sky. Players have been able to relive these adventures thanks to Mass Effect Legendary Edition, the remastering of the trilogy.

“We are delighted and flattered that BioWare and EA have allowed us to pay tribute [to Mass Effect] in this way,” wrote Sean Murray, head of Hello Studios. “As big fans of the series, this is a fantastic time for fans of science fiction. Like the rest of the world, we’ve been rediscovering the incredible Mass Effect universe through the launch of the Legendary Edition. It still gives me the creeps every time I see that iconic ship. ” The creative is delighted to have seen so many people having exactly the same reaction.

This little Easter egg will be available for a limited time, so if you want to get the Normandy, the best thing you can do is complete the event before the end, on May 31st. Murray also promises great news for the fifth anniversary of No Man’s Sky. More information will be “very soon.”

Although the video game started its commercial career on the wrong foot, Hello Games has not given up and has continued to update the product for free. It has received expansions and new functionalities, so it is closer to what it promised at the beginning. You can play it on PS4, PS5, Xbox One, Xbox Series X, Xbox Series S, and PC.

Deserts and Maps Will Appear in The Core Keeper Desert of...