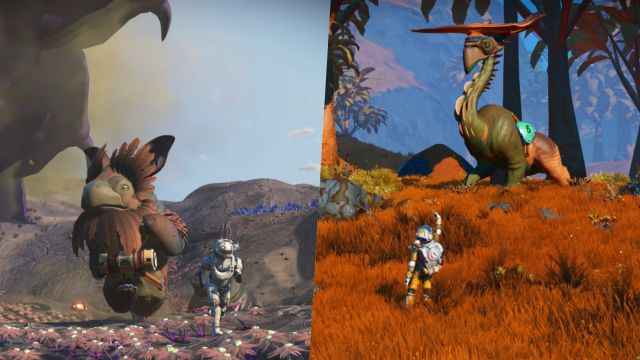 Hello Games adds the possibility of having your own pet in No Man’s Sky. The free update is now available on PS5, PS4, Xbox Series X | S, Xbox One, and PC.

No Man’s Sky will allow you to have your own pet. The function, available now for free on PS5, PS4, Xbox Series X | S, Xbox One and PC, will allow you to interact in different ways with the fauna you find on the planets.

As Sean Murray, founder of Hello Games, says in an article published on Xbox Wire, this update will take “to a new level” the concepts enabled in the Beyond update, back in 2018. While 3 years ago power was introduced “ feed and mount ”the animals, now you can bond with anyone you find.

Take your pet across the galaxy

This method of adoption will have several benefits for the player. It will always accompany you throughout your journey through the universe. During this phase you will be able to train them to carry out different actions, such as scanning resources, highlighting threats, giving light, hunting other animals, digging buried treasures or finding shelters, among other elements.

There is the possibility that they can leave eggs, which you can hatch and genetically alter using the new sequencer, which will give you the opportunity to personalize the newborn, adding accessories or changing the color. The creatures will have personalities defined by their species and the ecosystem. And what happens when you find other players with their own pets? Your personality will define the type of encounter you will have, be it aggressive or friendly.

Murray explains that we will be able to see the status of our pet in the interface, where “we will feel the growth of the relationship as we play with them, feed them and travel.” On the other hand, the creative says that 2020 has been “one of the busiest” that the team has had after 6 free updates to the game, including the new generation version.

As we said at the beginning, the update is now available for download at no additional cost. No Man’s Sky continues to add new content.

Crysis Remastered About Fans Will Explain Description: Will Not Contain Continued...