Home Entertainment No: Every Blockbuster & Horror Movie Reference in the movie 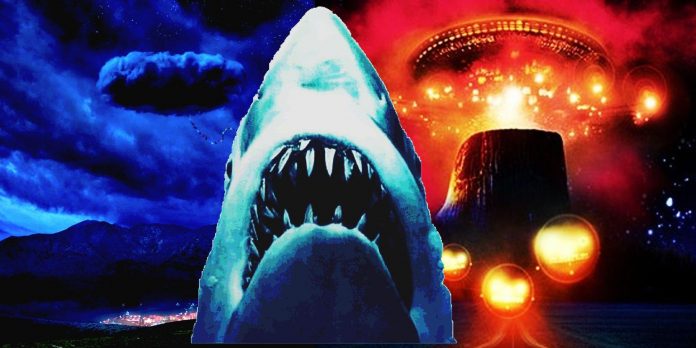 Jordan Peele has only directed a handful of films so far and Nope represents his biggest production yet, further cementing his status as an auteur with his unique blending of psychological horror, supernatural, and social commentary together with the almighty blockbuster genre. It should come as no surprise then, that a film focused on strange phenomena over a California ranch, a race to capture proof of its existence, and the chance to share it with the world despite the perils of death draws from several well-known blockbusters and horror movies.

Fans will find many distinct narrative beats, themes, and strikingly similar scenes from all across Steven Spielberg’s career, as well as directors who have been compared favorably to Peele, such as M. Night Shyamalan. Even if he references these films, Peele’s indelible mark on the blockbuster, horror, and sci-fi genres is defined by how he uses his inspiration in new and innovative ways.

Steven Spielberg’s Jaws, featuring an Ahabian quest for glory against a man-eating shark lurking offshore of a seaside town, not only inspires Nope with its simple and effective horror narrative but is the blockbuster spectacle Peele lampoons with his movie.

Antlers Holst, the famous cinematographer reduced to shooting cheesy commercials, even follows shark hunter Quint’s character arc, and when Holst recounts the “Flying Purple People Eater”, it’s in the same manner as Quint’s “Indianapolis speech.” Each man has a destined meeting against the very foe he seeks to vanquish, a predator whose connection to their life’s summation will earn them prestige, even as they represent the cautionary tale of hubris and obsession with notoriety gone too far.

Spielberg’s other outing, Jurassic Park, focuses on humankind’s arrogance regarding members of the animal kingdom as it follows John Hammond, owner and financier of a theme parking featuring dinosaurs, while he tries to assert dominance over a species he doesn’t understand. When the animals eventually rebel against their captors and go on a dangerous rampage, Hammond must face the consequences of his actions.

There’s one particular scene, in which the Tyrannosaurus Rex is fed a goat, but the predator wants to engage with its primal instinct to hunt, not be appeased. Trying to train it with human notions of domesticity is at odds with all of its natural programming, and just like the scene featuring the Star Lasso Experience involving Jupe and a horse, the T-Rex turns to eating people the same way Jean Jacket does. Jurassic Park illustrates OJ Haywood’s message of entering into an agreement with animals on their terms (instead of attempting to control them) by maintaining that only when humans and dinosaurs can co-exist to the dinosaur’s benefit will “life find a way.”

King Kong (and its many remakes) is the story of a magnificent discovery, a uniquely large ape found only on a jungle island, and the humans who attempt to pacify it and turn it into a commodity or sideshow attraction. Their pursuit of fame and fortune at the expense of the ape’s comfort leads to it breaking free of its bondage and terrorizing New York City.

Peele highlights a similar theme in Nope, beginning with OJ and Emerald Haywood trying to capture photographic evidence of Jean Jacket, and continuing with other figures like Antlers Holst, Ricky “Jupe” Park, and even the TMZ motorcyclist. Their quest for fame and fortune associated with manipulating Jean Jacket into doing what they want it to do without showing it any respect places them all in terrible danger. It’s ironic that King Kong inspired many movie monsters, despite what he represents.

Close Encounters Of The Third Kind

Another one of Spielberg’s top adventure movies involves its own flying saucer. Close Encounters of the Third Kind was a blockbuster in its day, with awe-inspiring visual effects that offered some of the most realistic representations of UFOs ever seen on film. Whereas Spielberg’s movie suggests humankind is ready for contact, that being invited into the saucer is an invitation to explore the cosmos, Peele’s movie shows that because humans can be selfish, only caring about documenting spectacle and being close to fame, to be invited into the saucer means only death and horror.

Just like when Jean Jacket arrives in Nope, when the mothership passes over an area with electricity, it causes power outages and dead zones. The film also follows a similar structural pattern, with the first encounter classified as the sighting, the second kind being evidence, and the third kind of contact with the alien mothership. There are those who flock to document the ship to get famous, and those hoping to just survive an alien invasion, with Neary desiring nothing more than irrefutable proof of alien life, not unlike the Haywood siblings getting their “impossible shot”.

Much like in Nope, Signs is a taut thriller featuring extraterrestrials that take some time to reveal themselves. A family who lives in a farmhouse (not unlike the Haywood ranch) is repeatedly antagonized by aliens through various methods, causing them to wonder about the true intentions of their spectacular visitors.

Signs uses language like “predator” to describe its aliens, and much like in Nope with the Haywood’s horses, it’s the other animals around the ranch that begin to notice the first “signs” of their hostile presence. Like Peele, director M. Night Shyamalan chooses to build a plot on mystery, as well as employ one of Peele’s other trademarks, a certain soundscape, and musical motif. Both directors let questions linger with their audiences about the alien’s true intentions even after they’ve finished the movie, and neither believe in giving audiences the payoff they expect.

Like the Haywoods, another California family is beset by strange and unexplainable happenings in Poltergeist, leading to supernatural entities trying to communicate with each member through their electronic devices. The ghost’s antics turn more menacing over time, until the family must make one final stand against them.

There’s even a moment in Nope where, “They’re here,” the famous phrase said in Poltergeist is used just as Jean Jacket arrives on the Haywood property. The film’s overall emphasis on family members, no matter how different coming together to stand in the face of menacing supernatural entities nicely echoes the Haywood siblings working together to protect their ranch while obtaining their “impossible shot”.