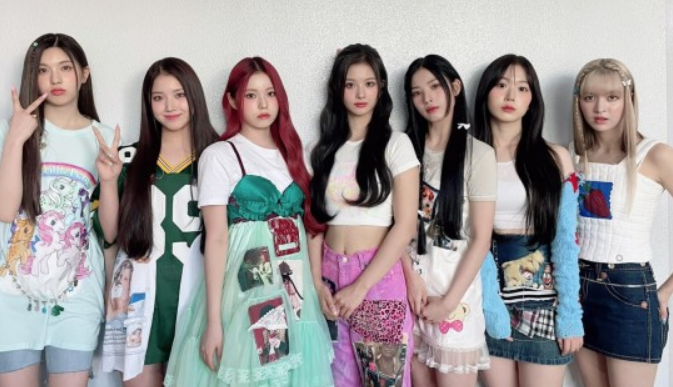 NMIXX’s first comeback “DICE” is constantly climbing up the MelOn charts. Yesterday, September 28, at 9 a.m. Korean time, it reached the 44th place in the MelOn chart in real time.

“DICE” by the new female group NMIXX has finally entered the top 50 of the MelOn real-time charts at number 44. This is 9 positions higher than their last peak position, which was at number 55.

It seems that more fans appreciated the song, despite the fact that it was confusing and mixed genres.

At first, many fans complain that the song did not meet their expectations and taste. Their return didn’t go so well.

However, it seems that fans are seeing the appeal of the mixed genre as the song increases its chart position.

The Theqoo article says in the comments that they listen to the song on repeat and finally they like it.

“I fucking love the “Big wave Big wave~~” part, so I’ve only been listening to this song lately ㅋㅋㅋ”

“I used to think it was worse than O.O, but the more I listened, the better the song got ㅋㅋ It’s a mix-pop, but the rhythm isn’t really that bad, and it’s pleasing to the ears”

“Listening to a song while watching a video is more interesting… At first it seemed a little dirty, but now I’m gradually getting used to it.”

“I thought this song was missing, but now I really liked it ㅠㅠ!!”

“The Big Wave part is their killer part, I love that part of the song.”

“Oh, I’m so hooked on this song. It seems that many people like the part “big wave, big wave~” ㅎㅎ”

“The song is goodㅋㅋㅋ Their debut song was very strange, but after I listened to Dice twice, I immediately got used to it”

“NMIXX’s Cool is also a great song, I’m so glad to see that the idol girls are doing well.”

The song also reached a new peak on the daily chart at number 80 yesterday, September 28, 2022. Not only that, they also got a new number for their daily unique listeners in Melon.

NMIXX have sold a million dollars with two singles

It looks like the new female group JYP Entertainment will soon reach a million sales as they have reached 970,000 albums sold if “Ad Mare” and “ENTWURF” are combined.

ENTWURF itself sold 483,736 copies of albums in the first week. It debuted at number one on the Circle Chart (formerly known as GAON).

NMIXX also reached new positions in other daily charts. They reached 36th place in VIBE, 144th in Genie and the same peak for Bugs, which is in 15th place.

On the other hand, NMIXX will be performing their B-side “Cool (Your Rainbow)” at “It’s Live” on Friday, September 30th. So don’t forget to check it out if you’re a fan.