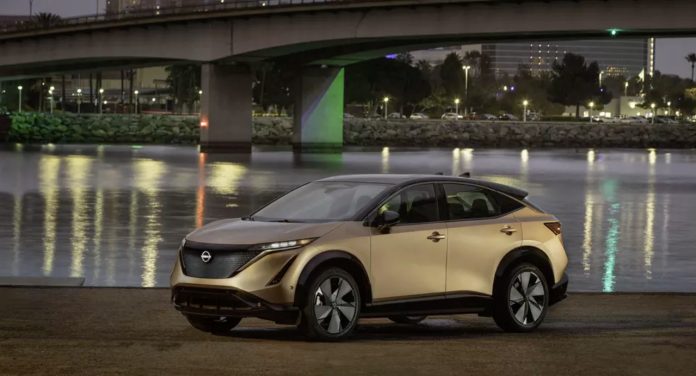 Nissan is pursuing great competition with the 2022 Ariya model, which is Tesla Model Y’s rival. The Roadshow released special footage of the upcoming electric SUV on Monday. The published images attract attention as the first shots of the USA exclusive Ariya.

Nissan Ariya will be available in the US this year

First seen in the production form, Ariya is preparing to meet with its users in the same way with its concept design. The electric car, which attracts attention with its futuristic front grille, stretches to the rear with a very simple belt line.

Ariya houses a simple horizontal light bar at the rear split only by the tailgate. On the other hand, it is stated that the car appeals to the eye with its sandy tin color.

Nissan Ariya continues its beautiful appearance in the car with its large dual-screen setup. Ariya’s batch number shows that both screens are physically linked. For example, if the passenger wants to call a coffee shop while dealing with the screen closest to him, he can slide the relevant image onto the driver’s screen to look at that call.

In addition, the Nissan Ariya is expected to be much more affordable than the $ 40,000 Tesla Model Y. How did you find the first published images of Nissan Ariya? Do you think the number one name of electric cars can compete with Tesla? You can share your ideas with us in the comments.

King Diamond cancels his show at Hell and Heaven 2020