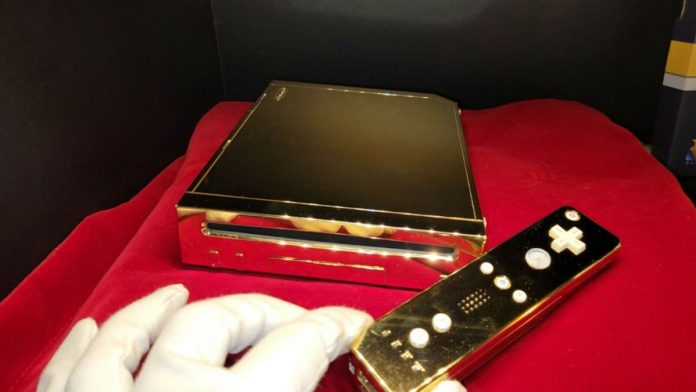 Nintendo Wii: The console, created as a gift to the Royal Family of England, is bathed in gold and the auction price starts at $ 300,000.Nintendo Wii accumulates more than one hundred million consoles sold, but surely there is no one as special – and expensive – as this one. This is a 24 karat gold plated console, designed for advertising purposes by THQ and for the sole purpose of becoming a gift to Queen Elizabeth II of England. The ostentatious machine was intended to accompany the Big Family Games title during its launch, although it eventually ended up in the hands of a collector.

According to the investigation of the YouTube channel People Make Games, the console never made it to British royalty. Instead, it ended up in the hands of collector Donny Fillerup, who has decided to sell it through the popular auction portal eBay. The bundle includes the game Big Family Games, the starting point is $ 300,000 and shipping costs are not included in the price.

Gold Nintendo Wii: The Most Wanted

Donny Fillerup managed to get hold of the console back in 2017, although the details of its origin, or the price he paid for it, did not transcend. In fact, it was the aforementioned YouTube channel that was in charge of investigating the market and locating it, ensuring that Fillerup had managed to keep a low profile, after acquiring the piece in question.

In an interview with the online video game store Consolevariations, the seller affirms that the reason for the sale is none other than to “find a better place” in his life, starting with buying his own house in which to have “more free time” . In addition, it also refers to the economic situation of him and his family, which “was never very healthy” and the “curiosity to know how much someone would pay for it.” At the moment, the product information shows that a potential buyer has not yet been appreciated.