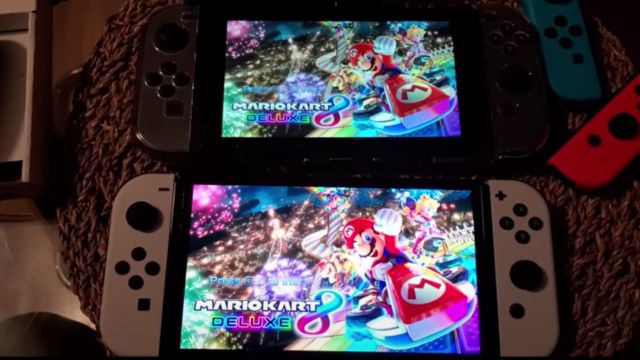 Nintendo Switch OLED: This is how both models differ with that slight increase in the size of the screen, not in the size of the console. On sale this October 8. Nintendo Switch OLED is the newest model in the Nintendo Switch family. After the original model of 2017 and its revision with improved autonomy in 2019, added to the only portable solution, Nintendo Switch Lite, this October 8, the first significant change of the current generation of the hybrid platform in portable matters hits the stores. A 7-inch panel (instead of 6.2 inches) with OLED technology in which, judging by our impressions, the change is more than remarkable. We already have the first comparative video between the OLED model and the original.

The YouTube content channel Nintendo Prime has received a video from MrZeke725; Although we do not know how this user has prematurely obtained a commercial unit of Nintendo Switch OLED. Apart from the corresponding unboxing, which includes the new dock with a serial LAN port to play online directly by cable, we have what will surely attract the most attention for those who doubt whether the differences between the two models are really appreciable.

We speak of only 0.8 inches of increase in the diagonal of the screen; however, both the change in technology and the use of frames favor immersion. The colors are sharper and more intense, with a higher contrast and a higher brightness volume that, added to the reduction of frames, we play with more space in view while maintaining the same distance from the screen. During our test we were especially struck by the coating on the screen, now less sensitive to reflections, and the way of representing the black colors of this OLED panel, which turns off these dots pixel by pixel to make it pure.

It should be said that the Nintendo Switch OLED Joy-Con will also be compatible with the Nintendo Switch and vice versa. Other improvements of this model come in the audio section, now with optimized speakers; 64GB memory and wide adjustable stand for table-top mode.

Nintendo Switch OLED goes on sale this October 8 for 349 euros; same day as Metroid Dread. The original model has dropped in price to 299 euros.

Pokémon GO: All Research, Rewards and Shiny for May