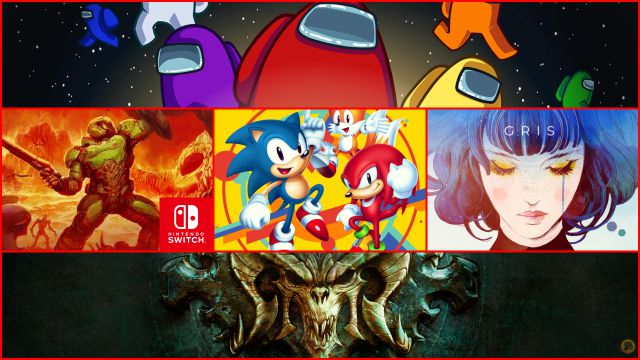 Nintendo starts a new promotion of titles on sale through its digital store, the eShop. Games for all tastes and at low prices.

Nintendo has announced a new promotion dedicated to Nintendo Switch video games through the eShop. Under the name of Digital Offers in the eShop, until next February 28 we will be able to find titles with up to a 75% discount, all of them available for download and link with our Nintendo account. In this way, if we change the console we can download them again when we log in.

Among the outstanding titles we find works such as Among Us, Diablo III: Eternal Collection, Sonic Mania, Burnout Paradise Remastered, BioShock: The Collection, Divinity: Original Sin 2 – Definitive Edition, GRAY, Unravel Two, Super Meat Boy or DOOM, among much others.

To access the promotion we can click on this link and log in with our account linked to Nintendo Switch, in case we are interested in buying any of the games on offer; or also enter directly into the eShop from the console itself. In addition, it should be remembered that with each purchase in Nintendo eShop we get gold points with a value of 5% of the total amount that we have paid. These points can be added as a discount on future purchases.

The Nintendo Direct held this February 17 has left a lot of announcements for the coming months on Nintendo Switch. You can read a complete summary here. To highlight, we have names like Splatoon 3, Mario Golf: Super Rush, Project TRIANGLE STRATEGY and The Legend of Zelda: Skyward Sword HD, but there are many more.

This year the catalog of exclusive games for the hybrid console will have its own names such as The Legend of Zelda, Monster Hunter Rise, New Pokémon Snap and No More Heroes III; although it is also important to remember that next week is the 25th anniversary of Pokémon. From The Pokémon Company they have announced that between February 22 and 28 we will have news about the saga, which opens the doors to the presentation of new Pokémon video games.

New photos of Meizu Zero with no physical keys and holes