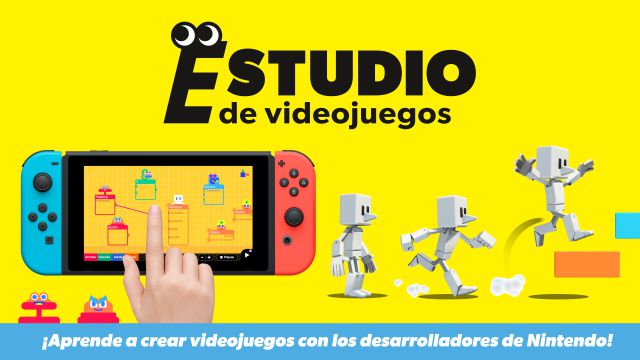 Nintendo, The Japanese company presents a title for Nintendo Switch that teaches, based on simple lessons, how to program video games. Date and trailer.Nintendo has surprisingly announced Video Game Studio, an educational video game based on the teaching of basic programming. Scheduled for this June 11 on Nintendo Switch, the work bases its didactics on showing the player the necessary steps to build video game levels with lessons, intuitive controls and options to customize and share our creations.

With the premise of turning the programming process into something fun and suitable for all audiences, Videogame Studio wants us to design gyroscope puzzles, car races, fights in the purest Super Smash Bros style … Imagination sets the limits.

The so-called Nodons are the creatures that will accompany us on this educational journey with a selection of audiovisual lessons that we can reproduce as many times as we want from the console itself; either in laptop mode or from television. The trailer that heads this news allows us to get an idea of ​​what this new Nintendo creation seeks to offer.

There will be several game modes. On the one hand, Lessons, with a repertoire of interactive classes that will not only be theoretical, but we will put into practice what we have learned with concrete examples. On the other, Free Programming, which opens the doors to creativity and invites you to take advantage of all the available tools. Once finished, we will name our minigame and we can share it with our friends via local connection or through the Internet. The same in reverse, with the possibility of downloading the levels of other Game Builder Garage users around the world.

Videogame studio will be compatible with the Nintendo Switch Joy-Con, the Switch Pro Controller as well as a mouse, if we connect it via USB. In the same spirit as Nintendo Labo in the past, the game will arrive on June 11 on Nintendo Switch in digital format (via eShop) at a recommended price of 29.99 euros. It will arrive translated into Spanish and will allow you to play with up to eight players.

RE Village: Players Cheat The Clock in The Limited PC Demo