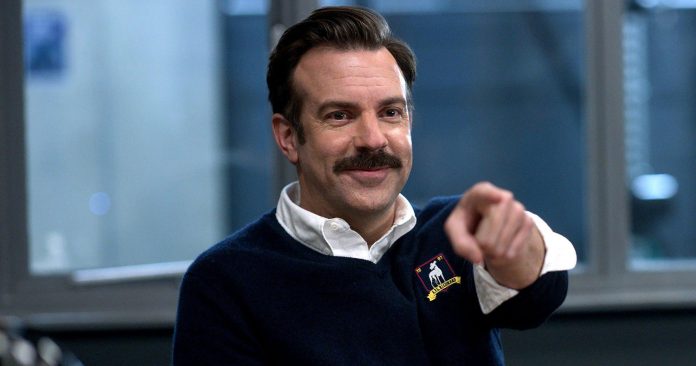 Ted Lasso does love a locker room — and his mustache. Jason Sudeikis, who portrays the lovable AFC Richmond soccer coach, grows out his facial hair for the Apple+ comedy, which is currently in season 3 of production.

“There’s pictures of Jason out and about. You can see it doesn’t look exactly like Ted, but it is mainly him. I add to it a little bit. We spend a lot of time on his ‘stache. We’re very aware,” the show’s hair and makeup designer, Nicky Austin, exclusively tells Us Weekly. “We don’t want it to become out of control. It’s every day in the chair. It’s to get the Ted ‘stache to come out. Basically, we have to keep working on it. He does grow it. He grows it for the season every time. And then he gets rid of it when we finish usually.”

‘Ted Lasso’ Season 3: Everything to Know

The ‘stache debuted when the series did in 2020, with Sudeikis, 46, also as its creator and executive producer. “He always comes back with a very supportive comment,” Austin says of the actor’s involvement in the look of the characters. “Sometimes even if he doesn’t want it, he’s like, ‘I love the thought that you put into it, but … Because he knows what these characters arcs gonna be. He knows where they’re gonna end up, which we all don’t. So I take my direction from him a lot of the time. He’s very involved in every aspect.”

Ted’s appearance hasn’t changed so much over the years compared to some of his players — more notably Jamie Tartt.

“Phil [Dunster] is so up for change and I’ve always had this thing with Jamie where I knew his character’s gonna start off being a little bit of a — I don’t want to call him a wanker, but we do use that word on the show. And then we kind of see him mature a little bit. So he starts off with that ridiculous hairstyle that I think I based on a picture of [Cristiano] Ronaldo from years ago before he got taste. And then he moves back to Man City,” she explains. “And then after he has his row with his dad in season 2, he loses the hair band. So again, becoming a little bit more mature.”

And according to Austin, Jamie now has “a new look again” in season 3. “That’s gone out the window,” she says of his old image. “Jamie is a character who people perhaps don’t realize how different Phil is to Jamie. He’s not from Manchester. He doesn’t have an accent. He’s a London boy. The way he plays him — I just think he’s so brilliant that we had to just change his look completely. He couldn’t look like Phil. I had to do a whole development with him. And the tattoo and everything. I just wanted to turn him into a real character. Because he changes himself so much to become Jamie that I wanted to do that with his hair.”

Other actors are in the hair and makeup chair for a shorter amount of time, however. Take Brett Goldstein, for example, who plays Jamie’s former nemesis Roy Kent on screen.

TV Shows Renewed and Canceled in 2022

“I think Roy stays the same pretty much. He’s one of our older characters in terms of how Jamie’s still a young premier footballer. Roy’s retired. He kind of knows where he is [in life],” Austin tells Us. “He’s such a handsome devil. I’d get in trouble if I changed Roy too much. But Jason felt was really important to show that when we see him first off in season 2, he’s not in a great place. And we showed that through his hair and makeup. And then you suddenly see this handsome devil come out of the makeup chair when he becomes a pundit. But no, I don’t really change Roy. He’s in and out of the chair. He’s 20 minutes. He’s a quick one. He’s a constant. He’s not gonna go for any tattoos anytime soon. He knows what he is. He’s happy with where he is. And he dresses in black. He wears the same clothes all the time. So, whereas Jamie, obviously he’s got his loud colors. He’s always trying to change himself. Roy Kent knows who he is, where he is in the world, and he just stays the same.”

The same can’t be said for Nate Shelley, played by Nick Mohammed. In the season 2 finale cliffhanger, it’s revealed that Nate transferred to rival team West Ham and showed off brand-new, white hair after a season of turmoil.

“It can happen that quickly. There are stories of people who literally have a shock, for example, they hear of a loved one suddenly getting sick, and they can literally go gray. … So actually, if you look at the timeline it actually has a bit of gray to his hair, and I dyed out to make him look younger in season 1. Then in season 2, as his character becomes angrier and moves over to the dark side a bit more, I started with it black and it started to become a little bit more gray,” Austin explains to Us. “And then as the anger is kind of overtaking him, Jason had this idea that he wanted him to lose the color in his hair. And it’s kind of — it’s a year, really, the progression of it. It just seems quicker because obviously we’ve only got 12 episodes, but the season’s passing through us and then that final shot is actually onto the next football season. It’s actually a few months later. So it’s actually the start. That last shot is actually the start of season 3 in terms of the timeline. It was a lot of work.”

Ted Lasso season 3 is reportedly set for a 2023 release. The series just picked up a whopping 20 Emmy nominations earlier this week.