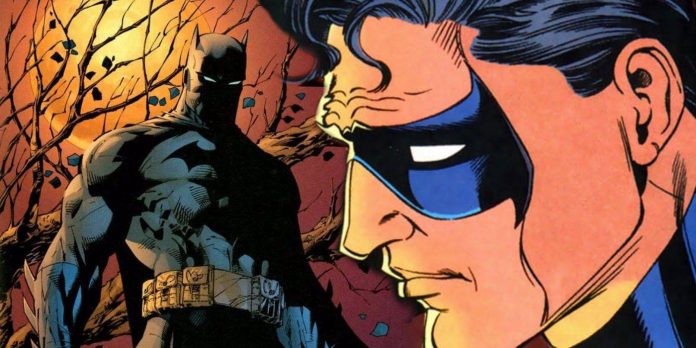 Batman and Nightwing often have a complicated relationship, after all, it can be difficult for an orphan to get close to his adoptive father when this father is so emotionally closed. It can also be difficult for a father to show love for his adopted son when he has previously lost the only family he has ever known. But when Nightwing thought he was dying, he was able to tell Bruce exactly what he needed to hear.

In the Forever Evil event, Nightwing found himself tied to a bomb that turns off only when his heart stops beating. Naturally, Batman promises to disarm him, save Nightwing and will not abandon him. Nightwing, however, fully believes that he needs to die, that this is the only way to save Batman and everyone else in the room, and being the hero that he is is completely fine.

In Forever Evil #6, written by Jeff Jones with illustrations by David Finch, Batman tells Nightwing that he will not abandon him and defuse the bomb. Knowing how Batman reacts to grief, Nightwing gives the perfect answer to Bruce’s statements that he will not abandon his first son: “You’re not like that, Bruce. And I never have been.” When Nightwing lost his parents, Bruce was there, when Nightwing needed guidance or help, Bruce was there. There are many examples of Batman coming to rescue Nightwing whenever he needed it, because no matter how difficult their relationship was, Bruce never abandoned and will never abandon his son.

Bruce was known to react very badly when people around him died, when his second son, Jason Todd, died from the Joker, Bruce was so overcome with rage that he tried to kill the Joker in response, but was stopped by Superman, as shown in the latest issues of “Death in the Family”. When Damian Wayne was killed by a Heretic, Bruce turned heaven and earth to save him, ranging from capturing Frankenstein to battling Darkseid to get Damian back, which was seen in the pages of Batman & Robin #38. Nightwing knows perfectly well what Batman would have done and did when he lost his son, this is once again confirmed when Lex Luthor stops the bomb by killing Nightwing, Batman immediately tries to kill Lex in response, ignoring his only rule at the sight of his son’s death.

Telling Batman that he didn’t abandon him allows Nightwing to do his best to comfort Batman, letting him know that he did everything possible to save him. It is unlikely that this will change Batman’s reaction to what is happening, but given the situation, Nightwing could not say anything more. Fortunately for everyone, Lex Luthor thought of everything and only stopped Nightwing’s heart without actually killing him, with a defused bomb, Batman can welcome his son back to the land of the living. Nightwing’s survival was good for everyone, especially Lex Luthor, because, as history shows, when Bruce loses his son, one of his rules goes out the window along with whoever killed his son.