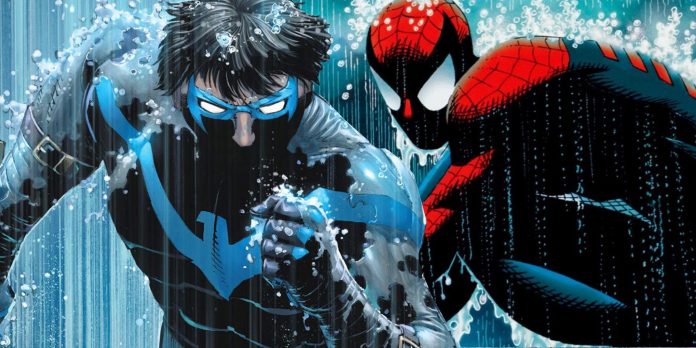 The Marvel and DC writer has just weighed in on who will win the battle of Nightwing or Spider-Man, and his answer is absolutely perfect. While superhero fans love pitting their favorite heroes and villains against each other in theoretical battles, it can be difficult to pick the ultimate winner if said heroes exist in different universes. So Tom Taylor’s determination is the most welcome (and rather hilarious) point of view, given how he had a hand in creating iconic stories for both legendary heroes.

Despite belonging to rival universes, Nightwing and Spider-Man are very similar in both abilities and character. Both use humor to their advantage, disarming and infuriating their opponents with timely jokes as well as any number of punches or kicks. Similarly, both Dick Grayson and Peter Parker are very agile and acrobatic fighters. While Spider-Man does have enhanced strength and spider-sense thanks to the radioactive arachnid that bit and gave him strength, Nightwing’s counteraction is likely to be his arsenal of gadgets along with the skills he honed almost all his life under the tutelage of Batman himself. .

While it seems like Nightwing and Spider-Man will be equal if they ever fight, Marvel and DC writer Tom Taylor recently took to Twitter to share his opinion on the matter. While currently working as a writer for the award-winning DC series “Nightwing” with artist Bruno Redondo, Tom Taylor has also written Spider-Man stories for Marvel in the past. Thus, it makes sense that his opinion will be asked on social networks. Surprisingly, Taylor eventually gives the perfect answer, confirming that Nightwing and Spider-Man won’t fight each other at all:

Not one. They unite, and Blockbuster and Kingpin slowly retreat. https://t.co/SetwPQ0NiK

Pointing out the similarities between their two biggest villains (Kingpin and Blockbuster), Taylor puts a strong emphasis on the fact that Nightwing and Spider-Man are so similar that they will probably just get along and become buddies. Having incredibly bright and optimistic personalities compared to their fellow heroes, it is quite logical that they will probably get along right away. Instead of fighting, they will most likely join forces to defeat their villains together, becoming an entirely new dynamic duo in the process.

While some fans may have been hoping for a more decisive winner, Tom Taylor’s response speaks volumes. Not only does his answer show how similar Spider-Man and Nightwing are, his decision not to choose one hero over the other implies that he probably couldn’t have chosen, given his self-proclaimed love for both characters. In any case, the idea that Spider-Man and Nightwing will just team up rather than fight is highly likely, and this is indeed the perfect response from the iconic Marvel and DC screenwriter.