Home Entertainment NieR: Automata — A guide to side quests for slot machines 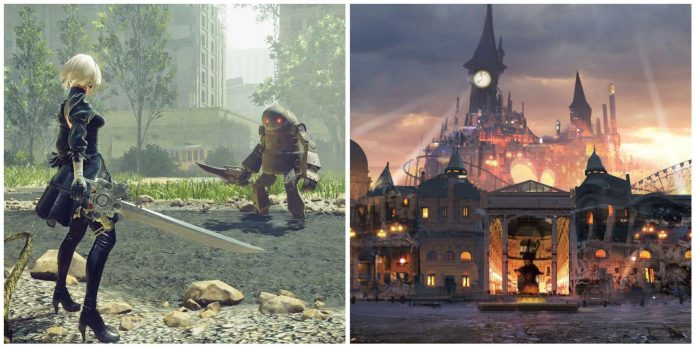 NieR: Automata places the player in a post-apocalyptic wasteland in which only machines and androids reside. Playing as 2B and 9S, the player is tasked with protecting what is left in this barren land so that the humans residing on the Moon may one day return to it.

During their ventures, 2B and 9S will be forced to battle their way through the machine lifeforms that plague the world, but not all of them seek to cause trouble. The Game Creator Machine is one of the more charming characters in NieR: Automata, as its only goal is to create a “fun game” to liven up his home in the Amusement Park. Here’s how to complete his quest.

The Amusement Park houses multiple side quests for the player to enjoy, but the Game Dev Machine quest is arguably one of the best. This unlikely Game Creator can be found inside the ruined building where the player bested the Beauvoir boss during the beginning of the game.

Upon entering the building, there will be three separate paths leading to different destinations with the Game Creator residing at the end of only one. Entering the elevator to the right of the ascending stairway brings the player deep into the park’s ruins where 2B and 9S will emerge in a narrow hallway, engulfed in broken machinery. This linear path leads to the domain of the Game Creator, where he can be found standing next to a tower of televisions. If 9S interacts with this unusual machine, he will offer him an interesting fetch quest.

The Game Creator refers to his home as an “un-amusement park” before informing the party that he intends to create a game to liven up the place. Unfortunately, he lacks the appropriate materials to begin designing this game, so he asks 9S to find them for him. If 9S agrees to assist this adorable machine, the first material he asks for will be a single tri-color cable. He goes on to say that these rare collectibles can only be obtained by defeating the more powerful machines that roam the Amusement Park.

The Game Dev Machine quest line can only be completed in Route B, meaning that only 9S is capable of appeasing the Game Creator. He will need to collect three different materials for the machine to complete his game, but some are more difficult to obtain than others. Like the Creator suggested, the single tri-color cable can be obtained from the machines scattered throughout the Amusement Park. The quickest way to find one is to journey to the machine statue at the park’s entrance where multiple machines aimlessly wander around. Though these machines are friendly if left undisturbed, only their destruction will reward 9S with the item he seeks.

AOE attacks will be especially helpful in dispatching the machines, particularly if they begin to surround 9S. They are not overly challenging at this point in the game, but they can quickly overpower the player if they amass the sufficient numbers. The single tri-color cable will eventually drop once all the machines have been vanquished. Once the tri-color cable is in 9S’ possession, the Game Creator will modify his game and ask 9S to debug it.

The Game Creator will thank 9S for bringing him the tri-color cable, but he is dissatisfied with the difficulty level of the game’s current format. He will then ask 9S to bring him a four-color cable to further increase the challenge of his game. If 9S agrees, the machine will inform him that the only way to obtain the cable he needs is to destroy the machines lurking in the Abandoned Factory. The fastest way to get to the factory is by fast traveling through the vending machines.

The first path in the Abandoned Factory leads to a ladder, which in turn leads to a series of hallways where 9S will encounter the machines he needs to destroy. They pose far less threat than the machines faced in the Amusement Park, so not much preparation is required to best them. Once the enemies on these narrow walkways have been torn apart, the four-color cable will be added to 9S’ inventory.

Upon returning to the Amusement Park, the Game Creator will thank 9S for his service and ask him, once again, to debug his now updated game. Even if it is debugged successfully, the Game Creator will remain unsatisfied with the game’s difficulty as he believes “hardcore gamers” would find it too easy to beat.

If 9S agrees to help the Game Creator one final time, the now erratic machine will ask him to explore the Desert to find the final component he needs. He states that the machines that drop the five-color cable appear in groups, so 9S may struggle in locating the correct machine if he doesn’t check his map. Upon entering the Desert, the map will reveal the approximate locations where the five-color cable can be found, so not too much exploration is required.

The first turn to the left after entering the Desert will lead to the machines that drop the five-color cable. The tall machine in the center of the crumbling structure will drop the material when defeated, so it is not necessary to destroy the entire hoard. Once the cable is brought to the Game Creator, he thanks 9S for all of his help before implementing the material into his gaming setup. After debugging the final version of the game, the Game Creator will admit that he has no other ideas on how to improve it and will reward 9S for his assistance.

It is reported that Rita Ora and Taika Waititi are engaged...