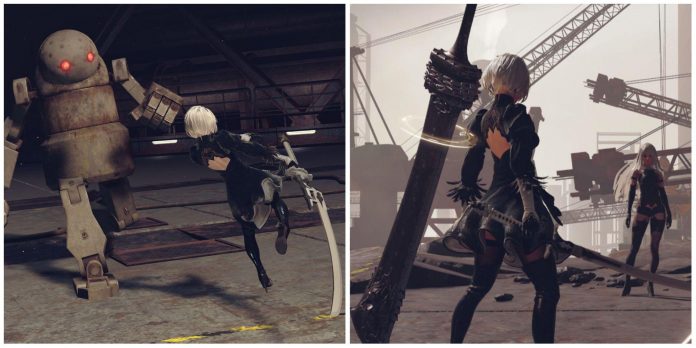 Set in a post-apocalyptic world, NieR: Automata aims to document the story of two androids as they journey to rid the lands of the machines that plague them. On their venture, 2B and 9S are faced with terrifying foes who seek to govern the now vast wasteland in which they dwell.

To combat their opposing forces, 2B and 9S must acquire the appropriate weapons. There are some extremely powerful weapons scattered throughout the world of NieR: Automata, but some are significantly better than others. The game’s upgrade system also allows the player to upgrade once seemingly powerless weapons into objects of great strength. Here are the best to pick from.

RELATED: Nier Automata: How To Get To The Flooded City

Obtaining the Angel’s Folly bracers requires the player to trust Emil, the eccentric shopkeeper who roams the areas outside the Resistance Camp. Emil will spawn in three different locations where he will attempt to sell his wares, but each area will see him selling a different selection of items. If Emil doesn’t initially appear outside the Resistance Camp, the player should use the nearby vending machine to travel away from the camp before promptly returning. If he doesn’t spawn, repeat the process until he does.

The Angel’s Folly can only be purchased from Emil outside the camp, so the player must ensure they have amassed the appropriate funds to buy it. It will also only appear if the player has received the “Wayyy Bored” message from the shopkeeper himself. Costing 25,000G, these bracers are more than worth their retail value due to their whopping 570-627 points of attack damage. The Angel’s Mercy ability it provides will also partially heal the wielder when an enemy is defeated with it, but only after its core strength is unlocked.

While playing as 9S during the second part of the narrative, the player will be able to unlock the once sealed chests scattered across the world. 9S’ hacking abilities permit him to do this, thus allowing him to find some much-needed swords to include in his arsenal. Upon journeying to the ruins below the Amusement Park, 9S will stumble upon a chest that requires a hacker to open it. Inside lies one of the most efficient means of decimating large groups of enemies: the Demon’s Cry.

The Demon’s Cry is a bafflingly powerful weapon prior to upgrading it, but its true strength reveals itself once it is fully powered. Defeating an enemy with it equipped will produce a shockwave that damages surrounding enemies, making it a great means of crowd control. This, accompanied by its speed, makes it one of the most sought-after weapons in the game, capable of inflicting 380-684 points of damage.

After completing the game for the second time, 9S will eventually be tasked with navigating the harrowing corridors of the Flooded City’s Soul Box. He must enter three of these towering structures if he hopes to gain access to the Tower, a mysterious facility that recently sprouted from beneath the crater outside the Resistance Camp. Though each Soul Box poses severe challenges that only 9S can conquer, only one will reward the player with Faith, a simple katana that harbors surprising power.

Upon reaching the second floor of the Soul Box, 9S will pass a singular chest containing Faith on his way to the next elevator. Faith comes with an that negates the power of incoming projectiles. Though there are several better weapons available at this point in the game, the player should make sure to equip Faith for the game’s final bosses due to this ability.

Bullet Absorb permits 9S to cut through projectiles as a means of restoring his health. Boasting a humble 608-722 attack points, Faith is must-have for those seeking to swiftly slash their way to the story’s climax.

Spear Of The Usurper

Obtaining the Spear of the Usurper requires the player to complete the Heritage of the Past side quest, wherein 2B is tasked with collecting ancient artifacts that allude to the desert city of Facade. Upon retrieving all of these items, the researcher at the Resistance Camp will reward the player with the Spear of the Usurper, a terrifyingly powerful weapon that houses a fascinating trick up its sleeve.

When fully upgraded, the spear will have 836-1026 points of attack damage, alongside a unique ability. The Turncoat ability has a chance to alter an enemy’s allegiances upon being attacked with this weapon. Though the chance of inflicting this mind control is somewhat slim, it is incredibly beneficial when it works, particularly in dire situations. The Spear of the Usurper is a necessity for those who plan on facing the game’s more dangerous foes.

2B will find the Virtuous Treaty during the game’s opening segment. She will lose access to this iconic blade upon completing the prologue, but she can reclaim it by visiting the entrance of the Abandoned Factory where she previously fought the Goliath known as Engels. The blade will be seen standing upright where the player bested this foe, so it is not difficult to relocate. Once this sword has been obtained, the player should inspect the body lying nearby to reacquire the items 2B lost during the game’s introduction.

Once upgraded, the Virtuous Treaty becomes one of the most powerful weapons in the game, boasting 1140-1254 points of attack damage. The player can seek this weapon out immediately upon returning to Earth, so it is recommended they prioritize doing so above all else.

Playing as 9S permits the player to complete an array of side quests available only to him. Upon completing the Data Analyst Freak 2 quest, Operator 21O will gift 9s with the Type-4O Blade, an immensely powerful and heavy sword that provides the wielder with two handy abilities. Similar to Cloud’s Buster Sword in both shape and size, this overly large blade is a great weapon to obtain during 9S’ story.

Fully enhancing this weapon gifts 9S with the Stun Up and Energy Charge abilities, with the latter being far more beneficial. Allowing 9S to passively charge his weapon, the Energy Charge serves to improve the pacing of more arduous combat situations. Unlocking the full potential of the Type-4O Blade will allow this monstrous weapon to deal a shocking 1216-1254 points of damage on all who stand in the 9S’ way.

NieR: Automata is available to play on PC, PS4, and Xbox One.

Masters of the Universe: Saving Eternia – Will season 2 roll...